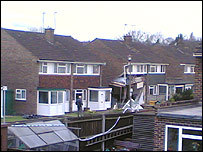 A house in Bromley collapsed today, leaving commuters facing lengthy delays on trains out of Waterloo, including the Eurostar. The house, which is near to the railway track, just caved in without warning, leading to 14 nearby houses being evacuated, and a 40 metre exclusion zone, which includes the railway, being set up.

This meant that the Easter Holiday traffic of little darlings off to meet Mickey Mouse at Eurodisney were first moved from Waterloo to Ashford, but the delays got to such a level that Eurostar had to start turning people away, telling them that their tickets would be refunded on another date.

Firefighters were called to the house at 4.30 this morning, when the residents reported that their front door was jemmed. Subsequently, two large cracks appeared in the wall of the house, and then an entire side of the house collapsed in on itself. The family were treated for shock, but no-one was hurt.