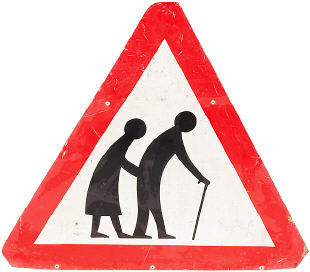 Whilst the Government's new terrorist laws have caused much controversy, with protestors in London being arrested for reading out lists of the Iraq war dead, a new development not only takes the biscuit, but raids the entire biscuit tin! Two OAPs have been arrested in Yorkshire under the Serious Organised Crime and Police Act.

Helen John, 68, and Sylvia Boyes, 62, were both arrested last Saturday for trespassing 15ft across the sentry line at a United States military base at Menwith Hill in North Yorkshire. They did this as a protest against what they feel are increasingly draconian anti-terrorism laws that are being imposed by the Government. Both women were held in police custody for 12 hours, before being released on police bail.

Neither Mrs. John or Mrs. Boyes are a stranger to the inside of a police cell. Between them, they have been arrested more than a dozen times. In fact, due to previous protests, Mrs. John has been nominated for a Nobel Peace Prize. So you can imagine the American soldiers' bewilderment when they saw two elderly ladies advancing towards them armed with a hammer and a small pair of bolt cutters as well as placards declaring their opposition to the new law.

The "terrorist grannies" incident only highlights the stupidity of the new law - why couldn't the police use some discretion and arrest them, for say, trespassing? It's not as if two geriatric protestors could have taken on an entire US army base, is it? Hang on, there's an idea for a film! Zimmer Frames of Death! Stephen Spielberg, if you read this, we should talk...