By London_Nick Last edited 170 months ago
London_Nick Be Very Afraid! 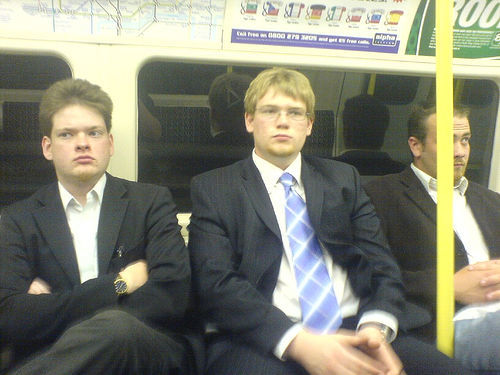 Peter Clarke, the national coordinator of terrorism investigations said something pretty worrying at a conference in Berlin yesterday - that London, and in fact, Britain in general, still has a high risk of suicide bombings. For most Londoners, like Londonist Nick (above middle, looking shifty), travelling on the tube or on a bus is an everyday thing. Therefore the news is especially worrying for Londoners.

"Since July, the pace of investigation, the scale of the threat has not diminished in any way whatsoever" said Clarke. He did say, however, that 35,000 documents, 10,000 witness statements, 38,000 police exhibits and 90,000 pieces of computer evidence had been looked at as part of the investigation into the July 7th bombings, and that seven Britons went on trial last month charged with plotting to carry out bomb attacks.

But what of the future? As Londoners will know, there have been trial runs of airport-style security at a number of London stations, and there seems to be a more visible police presence, along with more sniffer dogs on the tube these days, but is it all really practical? The point of the tube is that you can get to where you are going reasonably quickly compared to driving on the capital's congested roads. If, however, you have to go through a metal detector every time you travel on the tube, your journey will inevitably take longer.

So let's open this one up to the readers - what do you feel is the way forward for the security of London's transport system? Do you feel safe on the tube or on a bus? Should we have an all-out airport-style security system, or should it stay as it is? Do you think Peter Clarke is right - that the threat is still the same, or do you think the more visible police presence is a deterrent? Is it possible to find a happy medium between security and accessibility? Your thoughts on the comments page please!