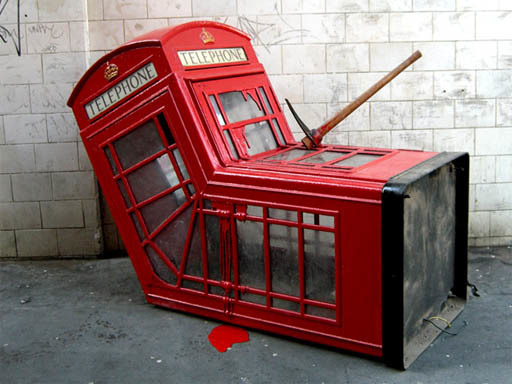 …from Westminster Council, who were less than impressed at his latest bout of street art. The notorious rat-fancier vexed the local authority by depositing an unorthodox red phone box in the Soho Square area a couple of days ago. Dead, or grievously maimed, the K6 was left in the street, bent double and bleeding; a pickaxe wound seemingly the cause of its anguish. But the undignified scene lasted only a few hours before Westminster Council carted it away to wherever red phone boxes go to die.

Nothing divides opinion like a Banksy stunt. Some readers will think this is puerile shite, others will deem it a work of Duchamp-like genius. BT, surprisingly, are in the latter camp:

This is a stunning visual comment on BT's transformation from an old-fashioned telecommunications company into a modern communications services provider.

Said a spokesperson. A sublime piece of PR, raising spin to the level of an alternative art form – even rivalling Banksy himself.

The curmudgeonly council saw things differently, however, and the kiosk was gone quicker than you could dial M for municipal waste management strategy. No planning permission, apparently. How very unlike Banksy to forget about the legal niceties.

Photo taken from Banksy’s website without permission. (Oh, the delicious irony if he tries to sue us.)