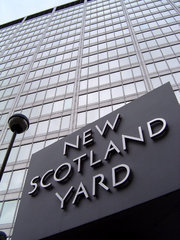 The Met Police have widened their inquiry into the cash for honours scandal across all political parties. The inquiry started with the Labour Party and their now-famous 'secret loans' from wealthy businessmen. But, the Police tell us, other parties are now being investigated, and although they won't divulge which parties these are, it's almost certain the Conservatives feature, as they, like Labour, received loans to fund their 2005 general election campaign.

The law, when it comes to donating money to political parties, states that anyone donating over a certain amount must be named. This was a bid introduced by Blair after the Tory sleaze scandals of the Major Government. This has, however, come back to bite the PM in the arse: He thought he was exploiting a loophole in the law by accepting secret 'loans' instead of donations (the creditors would then invariably cancel the debt after the election), and has subsequently offered honours and peerages to some of the donors - all wealthy, white businessmen.

Unfortunately, all political parties are at it. They all now rely on large donations from affluent individuals to stay afloat. Therefore, this potentially damaging enquiry can only further the argument for the introduction of state funding of political parties.