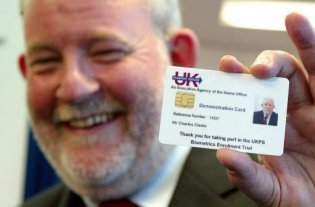 It looks like the battle over the I.D. cards Bill is set to end today, with the government making a major concession to appease the opposition. Today, the Lords voted by 287 to 60 to accept an amendment which would mean that anyone applying for a passport before January 2010 can opt out of having an ID card.

This ends speculation as to whether the Government would have to resort to using the Parliament Act to force the Bill through the Lords. As Londonist writes, M.P.s are voting on the Bill, which now has Conservative support due to the concession. The Lib Dems are still holding firm against the Bill, maintaining that I.D. cards are a colossal waste of money, and that the money could be better spent on getting 10,000 more police officers on to the streets. But their efforts seem futile, as the Lib Dems hold only 63 of the 646 seats in the Commons, so their opposition alone is extremely unlikely to defeat the Bill.

So, it looks like there is life in the old Labour dog yet - I.D. cards being another manifesto pledge delivered, but only through careful diplomacy.