By Talia Last edited 167 months ago
Talia Waterloo and Shitty 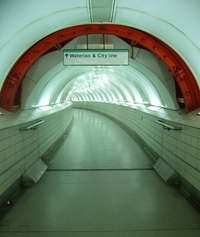 London always has a kind of love & hate relationship with the tube. We love it - it takes us nearly everywhere we need and does it in a much quicker way than any other form of transport. We hate it because it doesn't take us quickly enough and it's always bloody down.

The latter may be the feeling anyone who uses the Waterloo & City line is experiencing today as they take their final journey on the line for the next five months. For the last few weeks impending doom has been obvious as when approaching bank instead of 'change at this station for the northern, bakerloo & waterloo and city line', the lovely lady robot has been telling us different routes to Waterloo. Instead of one stop, the route suggested now involves taking the Bakerloo or Northern lines from Embankment and then eastbound on the District or Circle line to Monument.

To be honest though, we probably have to give TFL a break, after all the line is a whopping 107 years old. Originally the plan was to do the work over 76 weekends, but fears of running into Monday mornings put them off this idea. Given how little the line is used on weekends, we can't help but feel this would have less effect. But they're the experts we guess!

When the line reopens in September you'll be able to enjoy a relayed track which is said to increase ride quality & capacity as well as lessening journey time. Safety issues will be sorted and refurbishment of the carriages will take place. Bet you can't wait!

For those who are affected, you have our sympathies. You can read everything TFL has to say on the matter here.