Birds Of A Feather Flocking Together 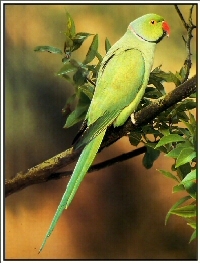 Seems like the American Robin isn't the only non-native bird to be settling in town these days. The results of the RSPB's Big Garden Survey are in and the Hendon and Finchley Times is proud to announce the increase in the numbers of rare species spotted in the borough.

Over 1400 borough residents took part in observing the local flight-life on 28th and 29th January, noticing an increase in sightings of ring-necked parakeets, red kites, waxwings and buzzards along with a decline in the numbers of more common garden birds. The average of 3.25 blue tits in every Barnet garden, has dropped to 2.62. So what does .62 of a tit look like? And no one say Phil Mitchell's head please.

Luckily the blue tit is thriving outside of Barnett with a 12% increase in numbers, but overall some of our most common birds are still in decline, despite their abundance in our hedgerows. Both the house sparrow and starling are down 56 and 76% respectively since 1979. If you want to see the full list of the top twenty twittering movers and nest builders across the country then you can do so here.

The response to the survey is quite staggering to read (470,000 people took part, including 86,000 children, capturing 8.1 million birds from 80 different species across 270,000 gardens - the equivalent of 7,000 football pitches), and a welcome sign that we're beginning to take a greater interest in the wildlife around us. For advice on what we should be doing to improve our local bird population, we turn back to Tim Webb, spokesman for the RSPB:

When you have birds around you, you know your environment is doing well. To give (Barnet's) birds a boost we need residents to do less; less grass cutting and less pruning will help provide vital habitat for birds to eat and nest in.

So there you have it. Throw away your lawn mower and do something constructive like building a park over your local McDonalds instead. And don't worry about stopping to let anyone finish their crappy meals before you send the bulldozers in.

The top 15 winged residents (Eros aside) for Greater London are listed below. The figure in brackets indicates the garden average, and not the victims of house cat attacks.