Is Damien Hirst Taking Over Vauxhall?

By Rob Last edited 204 months ago
Rob Is Damien Hirst Taking Over Vauxhall? 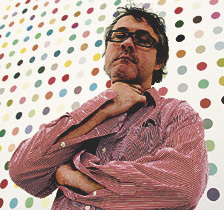 Did anyone read the interview with Damien Hirst in yesterday's Observer magazine?

It was mostly about Hirst getting drunk in Mexico and preparing to offend an awful lot of Catholics with some dead sheep, a few human skulls and some rosary beads, but there was this one little titbit towards the end of the article:

When I met him, [Hirst] had just received planning permission for his other big property venture - the creation of a new kind of art space which will take up 'half a street' in Vauxhall, south London. It will comprise nine separate gallery spaces, as well as a Hirst-designed restaurant and maybe a recording studio. 'I want it all,' he said at one point, when I asked if he has any ambitions left. 'And I want it now!' He was joking, of course. But, then again, maybe not.

Now we knew Hirst was planning to expand his 2,500 sq ft workshop currently located underneath Vauxhall's railway arches (if memory serves, there was talk of this in one of the broadsheets about a year ago) but we just imagined a pokey little 'warehouse' style gallery space, certainly not nine of them plus a restaurant and recording studio.

Is all this still going to happen in the arches we wonder? Is there enough room what with new gay sauna?

And does this mean Vauxhall is going to become the next Hoxton? Is the area ready for the new 'Pharmacy'? And what of the spooks who work at the MI6 building, will they mingle with the arty crowd creating a weird 'trendy spies' subculture?