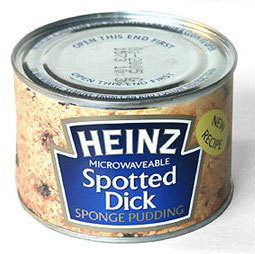 Channel 4 is going mad for the cock this week - more so than usual, even. We hope Armin Meiwes is tuning in from his prison cell - in between trying to sue Rammstein, that is. Es ist mein Teil, but a man's relationship with his dick isn't as straightforward as all that, or so TV Troll understands. 4's willy strand will explore the conflicting emotions that arise (aha ha ha) from this tricky intersection, in programmes such as The Perfect Penis (Mon 11pm C4 - not one for the squeamish, we'd bet, as it's a fair bet there'll be quite a lot of penis-knife action), Chopped Off: The Man Who Lost His Penis (Tue 11.05pm C4 - "lost" isn't really the word we'd've chosen, as it implies absentmindedness rather than the unfortunate consequence of a love affair gone wrong), and The World's Biggest Penis (Wed 11pm C4 - no, it's not a countdown show hosted by World's Biggest Dickhead Jimmy Carr, but rather a documentary that sounds like it wasn't very fun to film, according to Jacques Peretti in the Grauniad).

OK, continuing the bodyshocks theme, we know it's a natural thing - the most natural thing in the world, in fact - we know it's good for everyone involved, and that stopping it too early can lead to bad health, but the trailer for Extreme Breastfeeding (Wed 9pm C4) is in a class of its own when it comes to ickiness. Are Britons, with their notoriously uptight attitudes to breastfeeding in public, just too anglo-saxon and repressed, or is it just that a child that can walk, talk, say its own times tables and chew its own food has no business hanging off its mother's tétons? Hmm, tough one that.

We found out in last week's Prison Break (Mon 10pm Five) that Michael Scofield - the fake criminal and engineering genius trying to bust his brother out of prison before he is executed for a crime he didn't commit (couldn't he have called on The A-Team?) - just happens to have a plan of the prison he's banged up in tattooed on his chest. This is the kind of thing that's just bound to come in handy when you're trying to extricate your partially estranged brother from a tangled web of conspirators, murders and secrets-within-secrets. Also likely to come in handy: a terribly photogenic, idealistic lawyer, a terribly idealistic, photogenic prison doctor, and a winning way with origami. Last week's episode, being set in rainy old Chicago, was lacking the anticipated slow-motion prison yard walk through heat shimmers, although the other old standbys of the genre - taciturn and moody white supremacist, cheeky, voluble cellmate, cunning and brutal screw, stern yet sensitive prison governer - were all present and correct.

On to real life crims, and TV Troll's old favourite Donal MacIntyre is forging on with his quest to rebrand Five as the MacIntyre (And Cop Shows) channel this week, with MacIntyre's Underworld [is there any other kind?]:A Gangster's Funeral (Mon 11 Five). Now, by our count, he must have exposed/infiltrated/secretly filmed every single criminal in the UK in order to provide enough material for his prodigious output - so why have the latest crime figures not reflected this? If MacIntyre had handed over all the evidence he has compiled to the police, surely they'd have been able to round up everyone in the country even remotely connected to activities of a Caponean nature. In any case, tonight's programme - about the demise of Mancunian kingpin Desmond Noonan, now presumably in a gangster's paradise, and his interment - looks to be horribly fascinating, in a does-this-really-go-on? kind of way (assuming that no Londonist readers live on the same Manc council estate as the aforementioned defunct gangster - if you do, please let us know what you think). There's an interesting article with more background here.

Far more exciting than Mad MacIntyre is the news that Chris Morris has teamed up with some of the people behind The Office and Father Ted for the new C4 series The IT Crowd (Fri 9pm C4). Will it live up to its pedigree? Or will it be one of those dogs that's so overbred, it's blind and deaf and, ah, simple? The trailers haven't been much help: it could be genius or it could be an Asda SmartPrice Brass Office Ted. We're praying for genius, and will be staying in on Friday to see. UPDATE: Thanks to Londonist reader Ed who pointed out in the Comments that The IT Crowd is available to watch online for free. You can go out and have fun without worrying about missing it, now! :) One new series which has surpassed its forebears is Rock School (Sun 9pm C4). We admit we didn't think the last series was up to much - posh kids playing at rock. This time, Gene Simmons, he of the prehensile tongue and killer shades, is taking on a class from a rough comprehensive in Lowestoft, and the kids are soon desperate to get in the band - even the self-confessed "chav". It would be heart-warming if it weren't heart-rending, and our hearts were in our mouths (and then spat all over the carpet) when Gene chose the initial line-up. Totally addictive, and bound to make Sunday nights less depressing.

Oh, and we suppose we ought to be magnanimous and say well done to Chantelle, she defied the naysayers, she's a modern Eliza Doolittle, she's a 21st century icon, she's oh-so-po-mo, she's A FUCKING PARIS HILTON LOOKALIKE.