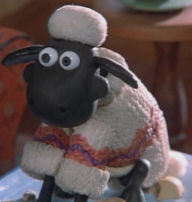 You go into hospital expecting to see certain things. Jim Dale flying down the corridor on a runaway trolley holding onto Barbara Windsor's underwear while Sid James guffaws into his bedpan for example. What you don't expect to see is sheep. Even if you tick 'lamb' on the MRSA encrusted menu you'd be surprised if the sludge served to you the next day looked at all like what you asked for. So it must have been quite a shock for all involved when a ram took a wander around St George's hospital in Tooting:

"Our groundsmen cornered the sheep before it found its way into one of our buildings and for the time being, the sheep or George, as we have taken to calling him is being looked after by hospital staff in an area well away from patients."

That name must have taken some time to come up with. Rumours of him being the hospital's own cloned version of Dolly were quickly quashed. Not surprising given that most British hospitals have yet to master the mop bucket so it'll be a few years yet before they get into the multi-cellular organism reproduction business.

No doubt If the woolyback had been a few tonnes heavier and struggling in shallow water then there would have been a few hundred people squabbling over who'd save him, but as it was no one seemed that bothered in taking the poor lost chap in. He was too ballsy for Dean City Farm (although you'd have thought he was in the right place for a surgical procedure) and just not domestic enough for the RSPCA. Instead he spent a week at the hospital before being allowed to run with his fellow chops in the wilds of... erm... Heathrow.

With news that Japan (where else?) will soon be staffing hospitals with robots perhaps St George's missed a trick here. Training animals to give bed baths could free up vital time for nurses. Time better spent bending over to ensure Kenneth William's nostrils flare to just the right size as the mercury pops out of the top of Sid's thermometer.