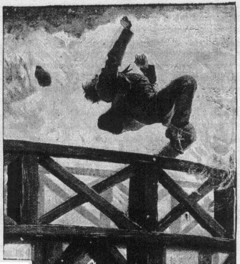 Every now and then the most banal Google search can throw up the bizarre, the disturbing and the sublime. This humble Londonista was trying to find out about housing in the Thames Estuary floodplain. How delicious, then, to stumble across a description of the destruction of London by a volcanic eruption so great that it makes Pompeii look about as impressive as a papier-mache cone and some vinegar and bicarbonate of soda.

It's from the Strand magazine, 1901, and it's written in a rather breathless Professor Challenger style. Comparisons with Richard Jefferies' After London are inevitable. The first five chapters of After London are well worth a read, by the way; after that it's rather dull. (I must mention JG Ballard's The Drowned World and John Wyndham's The Day Of The Triffids as two other books in the "Challenger tradition" of London-destroying. The Tain by China Miéville is a splendid modern example.) However The Thames Valley Catastrophe is most strongly reminiscent of HG Wells' The War Of The Worlds for its bathetic blending of Biblical furies of destruction with placenames so familiar that they are utterly banal. So you get wonderful passages like this:

A quarter of an hour later, there was no such place in the world as Uxbridge.

I followed the main road through the village which I have since identified as Hillingdon; then I diverged to the left, partly by roads and partly by field paths of whose exact course I am still uncertain, towards the hill at Harrow. When I reached the town, I did not strive to rouse the people, partly because my past experience had taught me the futility of the attempt, and partly because I rightly judged that they were safe from the inundation; for as it never quite covered the dome of St. Paul's, part of which still protrudes from the sea of basalt, it did not reach the level of the northern heights of London. I rode on through Harrow without one word to any body. I did not desire to be stopped or harassed as an escaped lunatic.

From Harrow I made my way tortuously along the rising ground, by the light of nature, through Wembley Park, to Willesden. At Willesden, for the first time, I found to a certainty that London was threatened. Great crowds of people in the profoundest excitement stood watching a dense cloud of smoke and steam that spread rapidly over the direction of Shepherd's Bush and Hammersmith. They were speculating as to its meaning, but laughed incredulously when I told them what it portended. A few minutes later, the smoke spread ominously towards Kensington and Paddington. That settled my fate. It was clearly impossible to descend into London; and indeed, the heat now began to be unendurable. It drove us all back, almost physically. I thought I must abandon all hope. I should never even know what had become of Ethel and the children.

It's that final "Ethel" that seals the brilliance of this story for me. Enjoy it. The rest of Forgotten Futures looks interesting as well.

(Searching for a reference on After London led to another fantastic description of London's destruction. The thickets of the internet bear strange and tasty fruit.)