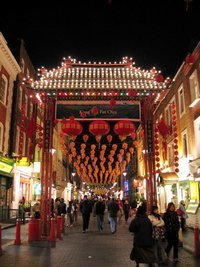 You may have noticed London was looking a bit festive in an Oriental style over the weekend. The Chinese lunar Year of the Cockerel ended on Saturday and on Sunday the Year of the Dog was ushered in with simultaneous events in Chinatown, Leicester Square and Trafalgar Square. In previous years the event has been celebrated only in Chinatown itself with restrictions on the amount of firecrackers and fireworks that could be used, keeping the parade route short but this year... well, Leicester Square was absolutely filled with firecrackers which resounded and echoed and really marked the occasion. Creating a parade route leading from Trafalgar Square through Leicester Square to Chinatown was also a major improvement in how London celebrates this festival - it really was the biggest of all Chinese New Year celebrations so far, taking over most of the West End and it was great.

In the run-up to Chinese New Year, people will have been busy getting their homes tidy, getting their haircut, getting the shopping in and stocking up on incense sticks, satsumas with leaves attached, red scrolls and lucky red envelopes. On the day itself (Sunday 29th) many families and individuals would have kept to the following traditions:

Try not to cut anything - this includes hair, nails, excessive amounts of paper or wood and so on. It’s considered unlucky to “cut” away threads of good luck brought in by the New Year so the superstitious would have kept using sharp knives and scissors to a minimum. Superstitious and traditional types would also have avoided housework, as sweeping floors and splashing hot water and bleach around the place could wash away any good fortune that has arrived for the New Year.

Observers of Chinese New Year don’t want to associate the start of the year with death by slaughtering animals – it’s considered better for your fortune to leave it for the next day and see in the new year without blood on your hands. In these modern times when killing, gutting and cooking your own animals for supper is quite rare, this translates as avoiding meat on the day – many families have a tasty vegetarian meal instead, like they do in Hong Kong where the public are known to climb the hills to dine at Buddhist monasteries for the best meat-free grub.

Chinese New Year should be noisy - loud noises are necessary to scare away any lurking evil spirits. For anyone who had their eardrums seriously abused in Leicester Square yesterday, you’ll know that the order of the day is to be as loud as possible with firecrackers, drums, cymbals and boxes of Fun Snaps (the little twists of paper that explode when thrown on the ground – kids love them, teachers hate them). Chinese New Year Day should never be approached with a hangover; Londonist can assure you from painful previous experience that just two minutes in the presence of a firecracker display or lion dance with its accompanying drums and cymbals will make you want to eat your own head with a soup spoon.

Other key elements of Chinese New Year include: Red envelopes - the New Year gift that is undeniably more fun to receive than to give. Senior members of the family distribute gifts of money – notes, never coins – to younger members in lucky red envelopes embossed with gold decorative characters and pictures. These lucky red envelopes can be given for all sorts of things, for weddings, birthdays, the arrival of new babies or just for luck for special occasions but it is only at Chinese New Year that people can expect handfuls of them.

Lion dances - basically, two dancers operating a lion outfit that is similar to a pantomime horse, with one dancer operating the ornate papier mache head and the other dancer operating the body, all to the accompaniment of loud and insistent drums and cymbals. They do tend to go on a bit with the dancers taking the lion all over the designated dance area (which could be entire streets in some places).

They always end with the lion “eating” a bunch of greens hung above a business or home’s door – there’s a red envelope full of money attached to the greens, which keeps up the theme of fortune and prosperity as well as covering the pay of the lion dancers. The drummers play a crescendo while the lion lies down to “eat” the greens then the dance reaches its climax as the lion leaps up (depending on the skills of the dancers, the one operating the head will leap onto the shoulders of dancer operating the body, bringing the lion to double height for the climax) and sprays the chewed up greens into the air, a symbol of the abundance of good fortune to come in the new year.

Satsumas with leaves, kumquats and goldfish – satsumas and kumquats are phonetically similar to the word for gold in Chinese language so are popular for displays at home and in businesses to encourage prosperity for the new year. We’re not sure why it’s important to have leaves on the satsumas but Chinese shoppers will go out of their way to find fruit with attached greenery at this time of year so it must mean something. Goldfish appear frequently in Chinese New Year decorations not because of any phonetic similarities to gold or prosperity or longevity but because they are gold-coloured fish. Sometimes symbolism is that simple.

Happy New Year! Londonist wishes a happy, prosperous and healthy Year of the Dog to all our readers.