Madonna: Buying Up London One Bit At A Time

By Rob Last edited 185 months ago
Rob Madonna: Buying Up London One Bit At A Time 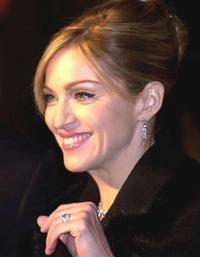 It's been reported today that Madonna has purchased another London property so she can "move more staff in".

According to the papers Madge managed to pick up the mews house at the bottom of her garden after badgering the banking consultant who owned it to sell over a period of a 'couple of years'.

A couple of years eh? Wow, she is persistent isn't she? This may be the first time we've ever felt sympathy for Guy Ritchie.

As for what she's going to do with the property, a 'source' told the Sun "Madonna likes the added security she will have owning the house next door. She has had big security problems in the past. She plans to move in more of her staff next door now and she said she could do with the extra office space."

Office space? Do you need a lot of filing cabinets when you're a pop star? We here at Londonist suspect that her Madgesty may just be looking to buy up whole sections of the capital like her own private Monopoly Game. Then when she's got enough she can just have it all transfered over to L.A. brick for brick so she can have the best of both worlds.

These crazy pop stars and their meglomaniacal schemes. When will it end?