Kick 'Em In The Balls 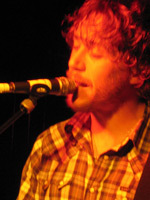 Four songs into the set and Four Day Hombre frontman, Simon Wainwright, is commenting on the incessent chatter. He recommends that those who continue to talk through the gig should be "impaired", perhaps by using a cattle prod, tazer or to simply "kick 'em in the balls."

We fear Simon may not have gone far enough, so before we get to the review proper we'd just like to ask that if you are one of those folks who spends their time in our country's fair concert halls waffling on with your buddies, you remove yourself from the gene pool in as violent and painful a manner possible. Alternatively we can recommend a good sterilisation clinic. You have less brains than a stick of chewing gum and are marginally further down the evolutionary ladder than dog shit.

Were you to sit down to listen to the fragile beauty of 13th Of The Month, then you'd understand our ire. Four Day Hombre deserve better than this. Fifteen dates into promoting their forthcoming second single, The First Word Is The Hardest, they're understandably tired and looking forward to returning to their native Leeds. And it shows. But only just. Despite all of the above, the band are still playing their beautiful bearded hearts out with a live sound that's as strong and vibrant as that on their soon to be released debut, Experiments In Living; replicating and improving the squealing feedback and distortion that closes Inertia with the greatest of ease. The Bar Academy is filled with passionate, heart warming, uncynical melodies, that call to mind (as we've said before) the work of Elbow and Radiohead. And they play with a similar authority, humble grace, and humour. Indeed their confidence is quite staggering for a band so early on in their careers, the result of 3 years of hard slog on the live circuit.

Possibly why Simon's between song banter is balanced just right, a mixture of warm humour, tales of the road and appreciation for their fans. To Rich, Ed, Jason and Ash, especially Rich's pitch perfect backing vocals, we apologise for not drawing enough attention to you, your time will come. But in Mr Wainwright you have a stunning set of vocal chords, as equally adept at pushing out the power as hitting high notes that even Chris (still trying too hard) Martin would weep at. That boy can sing, and if in the years to come he's not acknowledged as one of 21st Century Britain greatest rock vocalists then we're going to pack it all in and take up opera. If you don't believe us then go here.

Despite, a smallish crowd and the chatterers, the songs are warmly received. First single, 1000 Bulbs rightfully retains it's place as one of our favourite singles of last year. The way in which The First Word Is The Hardest drops into a cover of Kate Bush's Running Up That Hill is sublime and looks to become a staple of their live set for years to come. The eight songs are over far too quickly and at the end, with a final, engaging touch, the band applauds the audience back.

Four Day Hombre are playing at a level that far outstrips the claustrophobic confines of Islington. They have the determination to become a long lasting treasure, whilst our current crop of spikey guitar bands lose favour with the NME and run out of ideas. They may not be re-writing the rule book, but they are amongst the very best at what they do. Simon's plea that we spread the word is duly noted.

Four Day Hombre are back in the capital on the 28th February at the Notting Hill Arts Club as part of the Orchard Night.