(Another) One Of Our Sculptures Is Missing 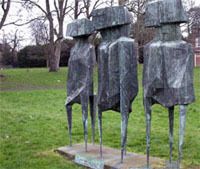 As regular readers will have guessed by now, Londonist is a big fan of public sculpture. So we’re seething at the theft of a second famous bronze from the London area.

You may remember back in December that a group of light-fingered but strong-armed crooks half-inched a £3 million Henry Moore from a Hertfordshire Park. Well, it’s happened again.

Part of Lynn Chadwick’s ‘The Watchers’ (1963) has vanished from the grounds of Roehampton University, near Chiswick. Police estimate that eight people would have been required to carry the 350 kg figure, seen on the right of the image.

We'd like to see them try and nick this 40-ton bastard.

Why steal a lump of bronze? Well, 20 have gone missing from the south east of England in the past six months. Police believe the artwork is simply being melted down for scrap. So when it comes time to purchase those Olympic medals, the authorities better check very carefully who their bronze suppliers are.