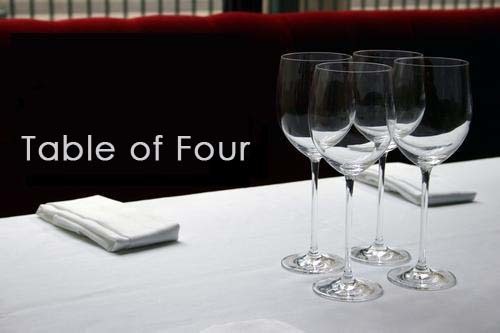 Tempted by a special offer of two for one on the a la carte, Londonist and partner wound up at W’Sens on a rainy winter evening.

The atmosphere was banging in a half empty bar, and mysteriously emptier still was the restaurant which did make you wonder where the noise was coming from. The dining room was populated by a moneyed mix of hot pants and pin stripes, the waiting staff sassier than thou and the wine list enough to make you gulp for fresh air. We plumped for a £40 Pouilly Fume and the waitress let go a sigh of approval and a knowing look as if securing her patronising endorsement was part of the dining experience.

Londonist was on the verge of getting rather upset by this intended display of snobbery but then the menus came, and, comfortingly, the food arrived quite quickly after that. The a la carte was a Gallic carnivore fest; we started with foie gras – warm, not hot, soothingly velvet but as bold as brass. The accompanying apple and lemon confit could have been smoother but was a good foil, tart and deep. Carpaccio of duck with a hazelnut dressing and truffle vinaigrette was incredible, full stop, and should become a signature dish.

Mains were just as good. Fillet of beef with grolles mushrooms was excellent; the meat well hung and earthy but the perfect medium rare, bloody; but not carnage. The potato dauphinoise that went with it was simple and rich, packed with garlic and like all good comfort food, it left you wanting more and feeling slightly ashamed for wolfing it in one minute flat. Another main of scallops with croquettes was allegedly great stuff but their diner scoffed them in a nanosecond and spent the next ten minutes gazing at my grazing. Sorry love, hands off.

We were stuffed to the gills after that but were harassed by several different waitresses within a millimetre of our straining belts to force down a dessert. We declined to a purposely visible roll of the eyes - if the restaurant had been full we would certainly have been moved to the cheap seats. The toilets meanwhile were dreadful with a capital D - no hand towels, soap or toilet roll! At £70 a head, even with half price food, this was inexcusable.

As we left, not quite sure whether we’d return, the unsavoury swirl of young, loud, old and sleazy in the bar explained where the noise was coming from – Sloanes with voices like speakerphones. It was enough to put us off; it was a party, but not our party. If only they kept it all about the food and there were more people to entertain the waiting staff, they’d be on to a winner.