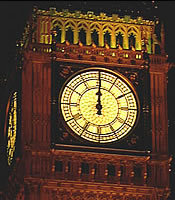 If you are willing to step out tomorrow night despite the impending tube strike then you'll probably be wanting to catch the New Year's Eve fireworks display put on by Ken & Co.

All the details are here but, as you might imagine, the fireworks will commence when Big Ben strikes midnight and will last for a good ten minutes. Apparently the display will be visible from "wherever you can see the Eye."

There is a bit of a warm-up to the big show though, for anyone who wants to get down to the Eye and stand around on the river for an hour: "There will be a rolling programme of lighting and large scale projection effects beginning at 8.00pm. Images of unsung London heroes, as well as celebrities who have contributed to the life of the capital during the past year will be projected on to the Shell Building, next to the London Eye."

We have to admit that's not quite enough to tempt us away from a ready source of central heating, but there will be big crowds down there and the Met is advising that "Access by road to much of central London will be restricted from 8.00pm until approx 1.00am. The area of closure covers roughly Oxford Street in the North to Lambeth Bridge in the South, Blackfriars Bridge in the East to Park Lane in the West."

On New Year's Day of course we have London Parade beginning at Noon in Parliament Square and finishing on Piccadilly, at Berkeley Street around three hours later.

Every borough of London is represented in the parade (along with dozens of other participants), but we thought we'd highlight Lambeth's entry this year as it's a bit of a change from the norm and highlights a particularly interesting London resident not a lot of people are aware of:

Lambeth’s Parade entry theme will mark the 60th anniversary of the end of WWII, and will honour a beautiful young heroine and former Lambeth resident, Violette Szabo. Violette became a Special Operations Executive after the death of her husband in 1942 and was parachuted into France for a very dangerous assignment. It was on her second assignment that she was captured by the Gestapo and executed at Ravensbruck in 1945, after undergoing severe torture and forced labour. The proceeds of the street collection will go to Lambeth MIND and the Sophie Centre.