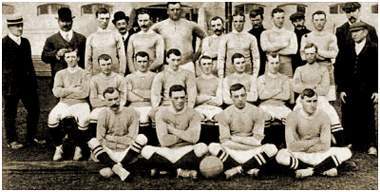 Association football was once again dominated by clubs from the Midlands and the North in 1905, with Newcastle United winning the League Championship and Aston Villa winning their fourth FA Cup. The Capital's sole representatives in Divsion 1, Woolwich Arsenal, could only finish tenth last season and have started the new campaign in equally dismal form, including a 5-1 reverse against Derby County.

These are unsettling times at the Manor Ground, with persistent rumours about the future of manager Phil Kelso (bound for Fulham?) and the club itself (destined for a move north of the river?) refusing to die down.

However, elsewhere in London football, things are looking up. Clapton Orient and newcomers Chelsea have been elected to the Football League, joining Division 2. Orient are finding life outside the Southern League a little difficult and end the year at the bottom of the table, but Chelsea are thriving in a fight for promotion with Bristol City, Manchester United and West Bromwich Albion.

Not everyone is thrilled with Chelsea's rapid progress though. There are many who see their arrival as yet another sign of the rampant commercialisation of the game that has come hand in hand with the spread of professionalism. With the owners of Stamford Bridge, the Mears brothers, having offered the ground to Fulham FC before establishing Chelsea, it does seem clear that their main concern is to enjoy the benefits of large potential revenues to be gained from the Stamford Bridge stadium's huge capacity, rather than giving anything back to the local community. Surely it is about time that the Football Association takes steps to regulate the ownership of football clubs, so as to limit the amount of profiteers and charlatans who are slowly seeping into the game?

Other London clubs are also making progress, with Queens Park Rangers moving into the Royal Agricultural Society Ground at Park Royal, which has a grand capacity of 40,000 and West Ham United moving from the Memorial Ground in Canning Town to the Boleyn Ground in Green Street, Upton Park. Fulham are in the prcess of building a very fine side indeed, with manager Harry Bradshaw basing his team round a half-back line consisting of the powerfully-built Scot Billy Morrison, the debonair 'Prince' Arthur Collins and the taciturn Scot Billy Goldie. If Bradshaw can add some strength to his forward line, then this club will present a strong challenge for the Southern League title.

Once club seemingly going nowhere though, is Tottenham Hotspur, who despite being the first team outside of the Football League to win the FA Cup four years ago, are seemingly no closer to election to the Football League. Spurs are inconsistency personifed and are seemingly incapable of deciding if they are more interested in either looking pretty or winning football matches.

Finally, some encouraging signs that football in London is still flourishing at grass-roots level. News has reached Londonist that a group of teenagers in East Street, Greenwich have formed their own club. They will be known as Charlton Athletic and will play in red. We wish them luck.