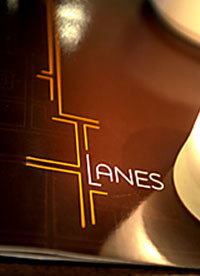 Do you see what we've done there? We needed a catchy little name for our restaurant review column, so after ooooh a good five minutes of debate, we've opted for Spit Or Swallow. The idea being that if the restaurant's any good you swallow and if it's crap...well, you get the idea. So here we go with our first contestant...

A few weeks ago, Londonist and five friends set out for dinner at the ‘Lanes’ restaurant, a basement affair just a few strides from Liverpool Street.

This unassuming and stylish restaurant has received extremely favourable reviews from respected sources so all the signs were good. We went on a special offer, two courses for £15. Disappointingly, however, the word special will not be required for the purposes of the rest of the review.

It is fair to say that the Lanes will probably be something of a destination restaurant at lunch time for suits’n’boots and it was a pretty safe bet that dinner would lack some atmosphere. The environment is just right though, light and adequately well aired despite occupying the lower ground floor of a faceless office block. Service was welcoming and consistent although not once were we asked how the food was. Given the unfolding (and vocal) disappointment and the fact that we were 6 of only about 20 eating, this was disheartening. There was little advice to offer on the good but exorbitant wine list although we managed to find a very good white and a red for under £30 each.

The set menu offered 3 choices for each starters and mains. The entrees were reasonable. Leek and potato soup was good but only lukewarm. The salad with nut dressing was better, a generous portion too, bloody and ripe Mediterranean roasted tomatoes that were perfectly succulent without losing flavour or form in the roasting and served with a sweet liquor that brought out their almost wine-like fruitiness. Ham hock terrine was the best of all, simple and unrefined, with gherkins and shallots threading softly and sourly throughout; fittingly salty, but a tiny bit dry. It could have benefited from some sort of apple confection to go with it rather than the pretty but bitty onion relish it came with.

Mains were so bad it was upsetting. Risotto of butternut squash, sage and amoretti biscuits was, frankly, inedible. The risotto itself looked like it had been tangoed and one bite into the mush just about set mouths on fire. This suggested two things; microwave or extensive time spent under the service lamp. Neither should be acceptable at a restaurant purporting to be of such calibre. Londonist struggled to find any edible trace of butternut squash amongst the rice, although the colour was certainly there. The amoretti biscuit atop this mound of molten rice was disgusting; a completely hopeless misjudgement. None of the risottos were even half finished.

Pancetta wrapped chicken breast wasn’t the best either. The three chicken breasts on our table seemed inordinately uniform and whilst the pancetta had expertly melded into the breast the saltiness had drained the chicken of some vital moisture. If it had been a decent cut or even a leg this could have been avoided, but again, like the curious of the amoretti biscuits, it seemed like a naïve misjudgement of the use of ingredients. The meat should have been accompanied by something moist and buttery – had anyone in that kitchen heard of mashed potato? – instead it arrived with tinned butter beans and various bits of courgette and mushroom in a gravy so insipid it looked and tasted of shop bought stock.

The evening had been highly anticipated and the Londonist left hungry without coffee or dessert and as quickly as possible, although even that was a struggle as they had hidden the wine. It was a dreadful disappointment especially when the menu, the environment and the service provided all the ingredients for a very pleasant night out.