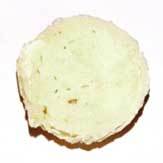 If there was such things as gastro-terrorists (you know, a crazed group of foody extremists hell bent on destroying the cabal of celebrity chefs that dominate the profession) then we think it's pretty safe to say that there would have been pretty tight security around Ristorante Fiore on St James's Street yesterday.

Umberto Vezzoli's Itaian restaurant was the UK venue for the seventh annual Alba white truffle auction and everyone who's everyone in the British food limelight was present it seems (the 'cheferati' included Tom Aikens, Gordon Ramsay’s sous chef Simon Zanoni, and Marco Pierre White).

They were all there to try and get their hands on some prize fungul specimens provided by Bruno Giorgi, London’s leading white truffle dealer (and Robert De Niro lookalike if you believe the Times).

All the proceeds of the auction went to the cancer charity Hands and Hearts, so bear that in mind before you read how much was actualy paid for them...because it's a lot.

At one point "an international bidding war" erupted over a 1.2kg truffle:

Londonist does remenber a similarly expensive truffle sale around this time last year. An event which ended tragically when someone went on holiday and left the fridge door open. Let's hope the lesson has been learned.

Right, we're off home now for some beans on toast.