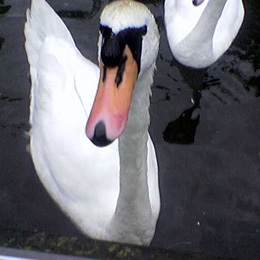 Today, like many of the Sundays that will follow until Spring returns the leaves to the trees, has started off pretty perfectly already. Waking up to a gentle glow from the fire, it's toasty enough to climb out of bed, stoke up the embers and get a little blaze going. The scratching at the window means it's time to feed the lizard and then climb back into bed to watch Futurama.

Only then can I brave the outside world to see if there's a queue for the shower before some form of gathering for a freshly brewed coffee will take place round one of the neighbour's; dependant, of course, on who's got the best fire going. Living in a world where there's only an inch or so of wood or fibreglass between you and the outside world awakens our primal urge to make heat.

Have a chat with the locals: George and Mildred aren't usually too far away and Jack and Jezzy or one of the kids will soon be hanging around the back door to see if there are any crusts going. Of all the bird life on the river I never cease to be enchanted by the regal swans. Don't get me wrong, I love watching the cormorants battle with eels after torpedoing them from the depths , or the punk headed grebe's covering vast stretches of the river underwater. Even the coots, the chavs of nature, always bring a smile as they chase the other ducks out 'their' territory with their ridiculous squawking. But the sound of the wind beating under a swan's wings is truly magnificent, as powerful as any symphony man has created and a contrast to their effortless grace as they drift through the morning mist, as if on their way to the Grey Havens.

Or you can always have fun getting the gulls to catch bread in mid air.

If supplies are needed it's best to be in town before the 11 o'clock kick off, which gives me time to indulge my addiction to Starbucks Chai Tea Lattes with a Rise'n'Shine muffin in the square. Then it's do the necessary and get the feck out of Dodge. For me the bridge is a portal between the madness of the urban fiends and this gentler pace of life, naturally slowed down having put a good distance between you and the giant robots of commerce. No-one here is battling it out for your wallet and soul. It's a life that lends itself to doing as little as possible, which is what I'll be doing for the rest of the afternoon. If this were truly the perfect Sunday my goddaughter's would be over causing havoc with a bubble machine, but that'll have to wait for summer now so instead it's play a few tunes over lunch, Sufjan Stevens is getting some heavy rotation on the H.M.S. Mark these days, and having stoked that fire up (never forget the fire), while away the remaining hours with whatever new releases the DVD shop had on Friday.

At some point the evening will no dout find me back on one of the other boats, or maybe a couple of friends might have dropped round. Nothing too hectic, nothing too heavy, tomorrow I return to my secret identity as a commuter and working slob.