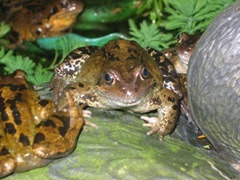 Note: As fully paid-up members of the Union of Tired Hacks, we are professionally obliged to use the phrase ‘croaked it’ in any article about dwindling amphibian populations. We hope that this will not spoil your enjoyment of this article.

Our frogs and toads are dieing, people! It’s a well-documented global problem. Of the nearly six thousand known species of amphibian, almost a third are in danger of extinction.

The decline, at least in Europe, is blamed on the spread of the fungal disease chytridiomycosis. Our embattled pond life also has to contend with pollution, climate change and pesticides. And based on our own flippant guesswork, 50% of Britain’s frog population currently resides inside primary school classrooms, which can’t be healthy.

So its good news that £2.2 million is being pumped into amphibian conservation by the Zoological Society of London. The money is earmarked for captive breeding facilities, better research labs and a public exhibition at London Zoo. Just don’t tell the culprit of this story.

Before you get dismissive and decide that frogs might as well croak it (there we go) for all you care, here are five reasons why you should love our little green friends:

1. Frogs have the most imaginative breeding regimes. Take the gastric brooding frog. No spawning into a nice pH-neutral breeding pond for her. Oh no. She incubates her young within her own stomach, from whence they hop out of her mouth to freedom on reaching maturity. How the hell did that evolve? Obviously didn’t work too well, as this frog is now thought to be extinct.

2. Frogs absorb water through their skins and so have no need to drink.

3. Frogs swallow by retracting their eyeballs, which helps to push food down their throat.

4. The paradoxical frog, while sounding like something out of Lewis Carroll, is a real species. Its absurd name derives from the topsy-turvy proportions of the tadpole and adult stages. While the tadpole can reach almost a foot in length, the adult frog is a shrunken 3 inches.

5. Frogs and toads have a largely untapped potential in medical research. They secrete a medley of exotic compounds through their skin, many of which may have important therapeutic activity.