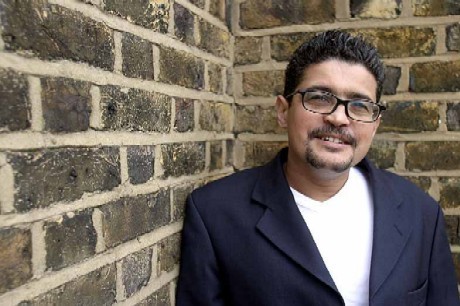 When Londonist heard that Chris Roberts, the man behind the excellent Heavy Words Lightly Thrown (the hidden meanings behind nursery rhymes), had written a book on London's Bridges we knew we had to get in touch and force him to complete the Londonist questionnaire.

So we did, and here are the results.

Older than I look.

It’s the restful library jobs I’ve had over the years.

For the last seven years I’ve lived in Walworth and in fact most of my dozen or so years in London have been spent on the sunny side of the Thames. Originally from North West England but raised in North East Wales, so that’s Liverpool and Wrexham.

What drew you to write Cross River Traffic: A History of London's Bridges? Was it a side effect of writing about ‘London Bridge is Falling Down’ for your previous book Heavy Words Lightly Thrown?

The possibility of the book came about quicker because of Heavy words but the original idea was to be a photographic book with pictures of London’s modern workforce wearing the get up of a previous era (i.e. bowler hats, brolly and pin stripes).

I was very interested in both the decline of bowler and the bridges. In the end the bowler stuff was dropped and the focus became exclusively on the bridges. Also living near the Elephant and Castle means you are virtually equidistant from all the bridges between Tower & Vauxhall.

(All the bowler hat stuff was eventually cut out but I can reveal that one major blow to the bowler came in the late 1960s when sales reps at Shell Oil were told they no longer had to wear bowlers to work.

Hairstyle was a key factor in the long term decline brought about by hair gel and greater interest in expressive (expensive) hair dos on the part of men. Wearing a bowler can seriously mess up your Barnet fair, or Hoxton fin, so carefully moussed in the bathroom mirror at home.

Another suggestion as to where all the bowlers went comes from a lighterman. He claimed to have quite a collection of hats that blew off the bridge onto his barge. If the owner shouted down, the lighterman would tell him which pier to come and collect the hat, but many didn’t bother.)

Do you allow yourself to have a favourite London bridge?

Well it really has to be Waterloo. Not just the majesty of the bridge and the history and film and that song but also the fact that it seems to offer all the potential of London from it. You can see Parliament, the financial district; the legal area, entertainment etc and you know that the West End is just up the road and the South Bank below.

Very fond of the recently battered Battersea Bridge as well.

We find that a lot of people size up a bridge by the view it offers. Do you have specific ‘criteria’ you look for in a bridge?

I think you are right that people do that and not withstanding what I’ve said about Waterloo above, one of the points of the book was to refocus attention onto the bridges themselves.

I didn’t however have any particular criteria it was more an overall impression of architecture, history and stories attached to the various crossings. If I had to pick out anything I suppose a sense of character and uniqueness, which is why many others and myself are, disappointed by the new Hungerford crossings.

Would you say London has the best set of bridges in the world? And if you could transport one bridge from another country to London which would it be?

Ha! I might say that because I live in London but going back to what I said before I think that bridges develop naturally in situ and I’m not sure they should be transferred. Also some of my favourites, such as the Menai Straits Bridges would clearly be out of place. Having said that I think shifting Rennie’s London crossing to the Arizona desert was so nuts that you have to applaud it.

What's the most fascinating piece of bridge-related trivia you stumbled across whilst researching your book?

There are loads, but I like the battle between men who enjoy wearing leather and embroidery (that’s Hells Angels) on Chelsea Bridge in 1970 and that dog urine is rotting the Albert. The latter resulted in me cycling to the Albert in a snowstorm last February, reaching down below the road level (wearing gloves) to find that indeed there is wood under the iron.

How do you think the more contemporary bridges in the book – the Millennium Bridge for example - stand up to some of the older landmarks?

See above for my opinion on the Hungerford but I think that the Millennium will hold up very well, despite it’s inauspicious start, as it does it’s job and people seem genuinely fond of it.

Do you subscribe to the ‘psychogeographic’ approach to London that’s been made fashionable by Iain Sinclair et al, or are you strictly a facts man?

Oh I do like the idea of psycho-geography as it’s a good means of looking at the city. I also like to draw links between the past and present. For example Vauxhall Bridge being built in 1816 to allow people access to the Pleasure Gardens whilst the more recent one provides a route to the many nightclubs in that area. However I don’t travel nearly as far down that road as the excellent Mr Sinclair.

We recently heard that the transport authorities have a long-term plan to get rid of all London's railway bridges. Have you heard anything about that?

I have to confess that I haven’t. Mind you getting facts out of TFL for the book was not as easy as it might have been.

What are you working on now?

A musical about an ambitious blonde from Grantham who goes onto become Britain’s first female prime minister. I’m calling it Margaret.

You should have said "Do you allow yourself a etc..." because since the closure of the Dive Bar last year I can’t really say I have a favourite bar anymore. As to restaurants it’s more a series of caffs really.

Don’t ever stop winding up the Evening Standard because as long as you do that you know you are probably getting something right.

In terms of usefulness to new arrivals Centrepoint is excellent as it allows you to navigate your way around the West End, though I like the way that the Swiss Ra building has mucked around with skyline recently.

Have you heard something I haven’t? Not sure about order but a good deal would be spent in bed and would finish on my roof as the views are good up there and I’d like a glimpse of the coming apocalypse. The day would sometime involve Waterloo Bridge, Postman’s Park, Pimlico and East Street Market.

Both Heavy Words Lightly Thrown and Cross River Traffic are available from Amazon.co.uk.