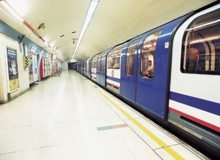 The Waterloo & City line is to be closed for as long as five months from next April so that "urgent repair" work can be undertaken. "Travel hell" hardly begins to cover it; the odd little W&C line, known to its "fans" as "The Drain" relieves a terrific amount of pressure on the Underground system. If closed, the thousands of commuters pouring in from the southern suburbs and attempting to get to the Square Mile will have a miserable time. Their options are:

* Or, take the Jubbly eastbound to London Bridge and either change onto the Northern or walk across the bridge.

Either way, it's a pain compared to the Drain, and it will be a pain for Northern Line, District Line, and Jubilee Line passengers as well.

Hey ho. If it's urgent it's urgent and better disruption and overcrowding than a derailment or a cave-in or whatever. And we were warned. When passengers return in September 2006, there will be swish redecorated trains to look forward to, and the line's livery will be finally, after 107 years, fully integrated with the rest of the network.

What's that you say? What's the significance of "fully integrated"? Well, gentle commuter, whisper it: the Waterloo & City isn't really part of the Tube network. It's a bit of a curio. It takes British Rail rolling stock, and was officially part of the mainline rail network until very recently. It was built by the London & South Western Railway company as a sort of consolation prize after it missed its chance to build a great City terminus and had to settle for grubby Lambeth.

This makes it - in a wonderful piece of Bureaucratois from TFL - "physically isolated" from the rest of the network. The train carriages have to be physically lifted and lowered into the tunnel by a hoist at Waterloo. As recently as the 1970s it had its own tickets, barriers and staff; an independent fiefdom within the network. And now those times have truly reached their terminus.