TV Troll: These Are A Few Of Our Favourite Natural And Man-Made Disasters

By Jo Last edited 182 months ago
Jo TV Troll: These Are A Few Of Our Favourite Natural And Man-Made Disasters 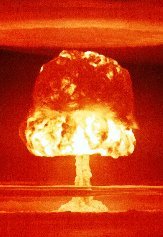 There seems something oddly obscene about ITV's decision to make a programme about the public's favourite images of death, destruction, mayhem, murder, pain, suffering, and general shittiness (ITV 50: The Shot That Shook The World, Tue 9.45pm ITV1). So, which is your favourite picture of disaster - the man standing in the path of a tank in Tiananmen Square, or the little Vietnamese girl crying as her body is engulfed in flames? Vote now via SMS for your choice! As the ITV website puts it:

To celebrate 50 years of news reporting by ITN, Trevor McDonald counts down 50 images of history in the making, from the assassination of JFK and the moon landing to the funeral of Diana, Princess of Wales, and the 9/11 attacks. Viewers can vote for the image they believe most shook the world, with the results revealed after the news.

Don't you agree, dear reader, that there's something ever so slightly distasteful about this? After all, how can it be possible to quantify the relative import of such disparate events? Given the kind of people who usually vote for these programmes, we'll probably end up with Kinga's wine bottle trick being voted more newsworthy and iconic than the Moon landings or something. Londonist believes there is an interesting and worthwhile programme to be made about the impact such images have on world opinion and events - we are all utter news junkies, after all - but it just feels to us that this is not the correct format for such a weighty topic. What next? Serial Killer Idol? We'll just have to watch The Shot That Shook The World to find out whether our fears are justified.

Far better suited to the list show format is Greatest TV Talent Show Moments (Mon 9pm Five). Regular readers may notice that TV Troll is rather obsessed with X Factor (Sat 6.10pm/8.10pm ITV1 - bootcamp starts this week, huzzah), and this promises to be the best of the worst best auditions in TV talent search history. As it happens, Londonist aspires to micro-celebrity status, and the best plan we've come up with so far for achieving the dizzy heights of the Z list is to appear as a collective on X Factor next year (if our revered Editro allows us out in daylight) and sing Cannibal Corpse's charming ditty, A Skull Full Of Maggots. Who wants to join us? Simon would just love it.

Housetrapped In The Sun (Tue 8pm C4) sounds utterly hilarious: from the channel that brought you A Place In The Sun, where pig-ignorant monolingual monocultural monobraincell Little Englanders move to Somewhere Foreign and fail utterly to fit in with local life, now comes a show all about said wannabe émigré fools who realise, several years/months/hours after moving, that 'overseas' is not an endless shower of cocktails, beaches and charming bistrots, and that our grey, rain-lashed islands really aren't that dreadful, after all. We could have told them that for free. Some property expert bloke is the presenter, and helps the failed sunseekers to move back home. Watch it, and be reminded that however bad the Central Line can get on a wet Wednesday morning, at least you aren't having to deal with French housing bureaucrats or the Australian tax code; you can even allow yourself a smug chuckle at the ex-ex-pats' expense, as they realise that the price they'll get for their Spanish dream home won't even buy them the proverbial broom cupboard in Blighty. We blame Alison Lamb, frankly.

There's further wilful stupidity on Underground Britain: Hippo Hunters (Thur 9.50pm BBC2), where we meet the rich shitheels who think that life is not complete without the opportunity to blast away at large endangered animals. Now, Londonist is no more a frothing ALF nutter than the next sane person, and we must admit we had a laugh at the idea of this holiday - before getting righteously indignant, of course - but this does seem to be a bit beyond the pale. As Wilde said, it's the unspeakable in pursuit of the inedible. Can't we lock these people up?

Miscellaneous bits: Londonist hero Charlie Brooker (Charlie, if you ever read this: WE LOVE YOU) has a new sketch show (Spoons, Fri 10pm C4); there's a new series of Stephen Fry's QI, said by many to justify the licence fee all by itself (Fri 10pm BBC2); David Aaronovitch gets stuck into god (God And The Politicians, Wed 7pm BBC2); ITV's new comedy-spin-off-from-the-film, Mike Bassett: Manager (Thur 10pm ITV1), becomes the first programme on UK TV to feature Ellesmere Port (main tourist attractions: Woolworths, the Boat Museum, and the refinery where the fuel bullying protests of summer 2000 started) as a location; and Spooks (Thur 9pm BBC1) tackles the infiltration of an Islamist terror group.

Finally, as the astute reader will have noticed, we're somewhat obsessed with zombies here in the Londonist dungeon. What's not to love? We feel it'd be remiss of us not to point out that this week you get a double helping of braaaaaaaaiiins as the Beeb shows Dawn Of The Dead (Tue 11.45pm BBC1) and Day Of The Dead (Thur 12.05am BBC2). Watch them, then go and see Land Of The Dead.

Oh yes, and did you think we'd forgotten Lost? As if! Don't believe the haters - it's still the best thing on TV, by far. This week: Sayid is not a happy bunny, there's an outbreak of ball games, and Sawyer broods photogenically. Happy watching, fellow goat-hating square-eyed bridge-dwellers!