Tech Me I'm Sick: Out And About

By London_Ted Last edited 181 months ago
London_Ted Tech Me I'm Sick: Out And About

Battersea bridge is closed and all roads that lead to the river seem to be a polluted gridlock at present. Fear not, the Londonist Tech are at hand with a few gadgets that might help those sick of the traffic.

Firstly smash your piggy bank. And then pray you have amassed a cool $3.5 million in that porcelain bellied swine because soon no Tech savvy commuter will be seen dead without the new Moller Skycar. The M400 Skycar is the world's first 'personal vertical takeoff and landing (VTOL) vehicle' ... errr…its a flying car kidz, you know, like in Back to the Future. This dream machine can cruise comfortably at 350+ MPH and achieve up to 28 miles per gallon. That is better fuel economy than some of the tanks driven around Chelsea these days. It is still in prototype but think of it - no traffic, no red lights, no scooters cutting you up. And I know it is an old adage but lads....you are guaranteed to pull in this puppy.

What else? Well this month no urban doggie should step out of the door without a Doggles Wearable Ionizer around his neck. If there is such a thing as pooch-tech-bling - this is it. The little ionizer attaches to the dogs collar and cleans the surrounding air near his snout (by making any airborne particles heavy enough to drop to the ground). So even though he'll still lick his own balls, sniff other dogs butts and eat shit in the park - Fido will still breathe easy.

For those of you with color iPods you might want to download this handy Tube Map. Make sure you get it quick however because both the New York and San Francisco metro authorities have asked the site to take down their respective maps because of copyright issues. Consequently all NYC iPod owners are now lost somewhere in the subway network. Its chaos. 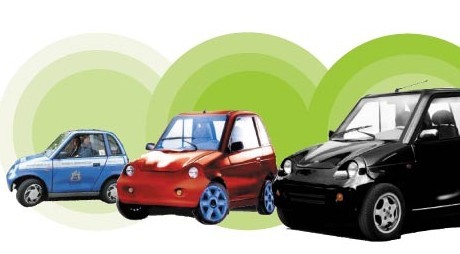 And finally, contrary to popular opinion you don't have to be a Hobbit to drive the new GoinGreen electric car. The Londonist Tech Team has been assured by Gandalf himself that they do not have extra large pedals and that any normal person can fit in the car with space to spare. More and more of these little dinky toys are being seen on the streets and for good reason - did you know they are exempt from Road Tax, exempt from the Congestion Charge and it is free to park them pretty much anywhere in central London on meters or in display bays. To top it all they are the most eco-friendly car on the planet.

Who cares if they are built for Hobbits? Why discriminate with specs like that?