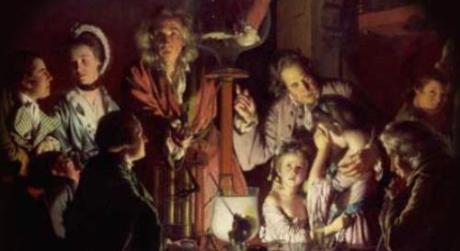 Well, I’m kind of interested in science, but I wish scientists would do more to explain stuff. A common complaint, perhaps, but how valid is it? In reality, many scientists bend backwards over their fume cupboards to try and get their message across. But hardly anyone is listening. Every week, in London, there are numerous events and discussions specifically aimed at improving the public’s understanding of science. But, while often brilliantly staged and more thought-provoking than anything the theatre could offer, these are by no means sell-outs. Surely there are more than 50 people in London who are interested in how the universe came to be, or how close we are to preventing Alzheimer’s?

The problem, of course, is PR. The scientists are out there, every night, trying their best to educate and entertain, but they get so little in the way of publicity (partly their own fault). So, we’ve decided to devote a short post each week to raise the awareness. Why not move out of your comfort zone and discover just how much there is to discover? 'But, hey, I’ll miss Eastenders,' is not an excuse.

As this is the first round-up of such events we've done, it's something of an experiment. Please do let us know if you think it's worthwhile. See you after the jump…

So, London is awash with scientific spectacles, eh? Where do I start? Well, you could do much worse than going along to the famous lecture theatre at the Royal Institution, home to the Christmas Lectures for children (as seen on TV!). Don’t be put off by the exclusivity of its name. The Royal Institution is neither stuffy nor intimidating, and goes out of its way to make visitors feel welcome. Tomorrow, Professors Jane Askham and David Elliott discuss the ramifications of our aging population – in particular, how will society change when a major portion of its citizens have impaired vision or hearing?

As people find ever-more inventive ways to present complicated ideas, perhaps we'll see the scientific debate morphing into something like the 'alternative comedy' of the 1980s. Don't believe us? Check out the next two events, which cock a snook at the traditional art/science barrier.

Have you ever had a memory lapse? Or, have you ever had a memory lapse? If the answer is ‘I can’t remember’, perhaps you’d be interested in watching Mind the Gap, a new play from the Y Touring Theatre Company, on at the Dana Centre tonight. Set in a Tube station the ‘actors show us the tragedy and confusion of people struggling with their memories’. Ah, we see, Mind The Gap. How very clever. It’s free, and afterwards you get to join in a discussion with a couple of brain researchers. Go!

The Dana Centre deserves far more attention than it gets. We’re tempted to go back again the following evening to catch ‘The Man Who Discovered That Women Lay Eggs’. (And he probably did need catching, mid-swoon, at such an unexpected result.) The intriguingly named Full Beam Visual Theatre tell the story of the reproductive system through the medium of puppetry. Now, come on, really, try telling us that science is dull.

But if science presented via theatre or lecture is still just a bit too dry for you, something of a must-see has just opened at the London IMAX. ‘Magnificent Desolation: Walking on the Moon 3D’, or MD: WOTM3D as we like to call it, uses state-of-the-art graphics to recreate the lunar landings. Thus, more fuel is added to the ‘we never went there, it was all faked’ fruitcake conspiracy. With a return to the moon very much on Nasa’s agenda, the release is a timely reconstruction of mankind’s greatest adventure. Tom Hanks narrates; John Travolta, Paul Newman, Morgan Freeman and Matt Damon ‘act’; audience’s jaws drop.