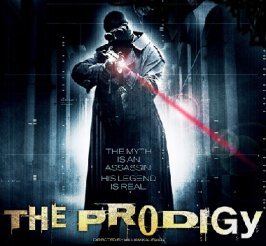 The 13th Raindance Film Festival is well underway and we've already been bowled over by the gems on offer. Yesterday we saw a cracking Swedish police thriller based on Henning Mankell's Kurt Wallander novels, a snowy Japanese indie flick about three kids up to their necks in trouble and the hit of the festival so far - Late Bloomer. A beautifully shot piece of film about a man with cerebral palsy slowly becoming a serial killer as he drifts further away from those trying to help him. The potentially objectionable subject matter is thoughtfully revealed in a film that is far less exploitative than most big budget Hollywood thrillers. The team over at Midnight Eye put together the Japanese strand of Raindance and you can read a remarkable interview with Late Bloomer's director Go Shibata here.

Tonight's big film is The Prodigy:

Truman Fisher (Holt Boggs) is your typical small-time mob enforcer. He’s got the guns, he’s got the mob mates and he's got the gorgeous girl. But as he delves deeper into the butchering of his mob-boss's family, he begins to realise that darker forces are at play and the real prey is himself...

But if you only get to see one film then it's got to be Evil Aliens. It only plays next Saturday but it's sure to sell out fast:

A band of aliens has been terrorising a remote Welsh island and its livestock. The hard-as-nails but barely articulate farmers are out to take revenge for their sister, impregnated by the visitors on one of their fly-pasts, but they have a rough time of it. Their unlikely saviours are a film crew reporting on the story along with their geek-expert. Abductions, anal probes and butchering sprees are the aliens' stock-in-trade, and the humans aren't much better when the pressures on... It’s the inventive set pieces that steal this show. A field of aliens mowed down by a combine harvester to the Wurzels anthem to farmers everywhere? A showdown in a septic tank? Gloriously politically incorrect, and disgustingly gory, the only reasons not to see this are if you are very sensitive, vegetarian, an alien or perhaps Welsh.

Another favourite of SFist and again Eve put us in touch with the people that matter which means we'll be chatting with the director Jake West next week - hopefully not in a septic tank.

Full details of all the above plus ticket info and Brian Blessed can be found on the festival website.