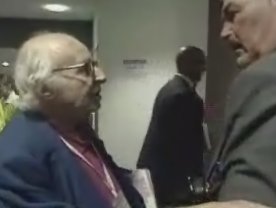 Londoner Walter Wolfgang made the mistake of disagreeing with Jack Straw at yesterday's Labour Conference and found himself manhandled and ejected by security guards. The pensioner shouted "nonsense" in reply to Straw's defense of the government's Iraq policy and was pounced upon by three men the size of sumo wrestlers. Another man sat nearby tried to intervene and was also thrown out. An over reaction by security staff perhaps, but it does reflect badly on New Labour. Straw was obviously aware of what was going on, but continued with his speech and when Mr Wolfgang later tried to reenter he was stopped by police who cited the Terrorism Act and seized his conference pass.

Labour... what the fuck?

We all knew that anti terrorism legislation was open to abuse, but we never dreamed it would be turned on pensioners. The sad thing is that Mr Wolfgang being a Labour member for 57 years (that's five years longer than Mr Blair has been alive) was one of the few people in the country with a genuine interest in the conference. It also turns out that Mr Wolfgang escaped the Nazis in 1937. The Conservatives are going to have a field day with this. It also makes you wonder how Howard and co. are going to top this at their conference in Blackpool next week. Strangling kittens on stage perhaps...

Blair apologised on TV this morning, but ruled out meeting the pensioner face to face. Nice. Plenty of time for glad-handing when the elections are looming, but a genuine apology to an old man abused for disagreeing with you? Forget about it.

If you caught the video footage of one of the Neanderthals grappling with Mr Wolfgang outside the hall you'll have seen the visibly shaken old man standing his ground and saying "I've got a right to my views as Jack as to his" Jack's view and the line that kicked off the whole incident was this:

"We are in Iraq for one reason only - to help the elected Iraqi government build a secure, democratic and stable nation."

Not as refined as Mr Wolfgang we'd have simply shouted Bollocks.

Rumours that John Prescott will be facing off against the stewards in conference finale cage match have yet to be confirmed.