Sightseeing With The Folks 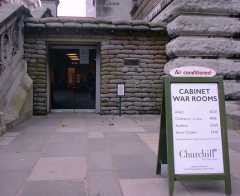 My parents are coming to visit and I can’t stand to go on the bloody wheel again! Any other suggestions?

Here’s a revelation we had during a visit from our own elders last year: Parents are old, so they like to look at old stuff. Especially stuff that’s about as old as they are. In other words, you can’t go wrong with World War II.

Make your way to the new-ish Children's War exhibition at the Imperial War Museum, an eye-opening look at daily life during and just after the war. Your parents will not contain their excitement while looking at old-model cookers and soap that reminds them of their mothers. You’ll find the exhibition compelling too, unless you’re remarkably uninterested in history.

Then head to The Cabinet War Rooms, which are brilliant. After the war Churchill and friends basically just shut off the lights, locked the door, and emerged above ground. Everything is pretty well intact. The museum had an overhaul in 2003 and this summer saw the launch of the adjoining Churchill Museum. Admission is a parental-sized £10.50, and comes with an audio tour.

Another option is the Blitz tour from Original London Walks. They meet at 2:15 every Thursday at St Paul’s and take you through London’s "finest and most desperate hour."

In case your parents aren't into that:

Vinopolis, if you like to get pissed with your mum & dad.

Sir John Soane’s Museum. People are always pleasantly surprised with this one.

Tower of London. Still fun as an adult.

Anybody got more ideas?