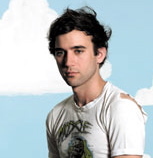 Right, no messing about, there's a hot ticket in town, and it's to see Sufjan Stevens play an acoustic gig in the intimate surroundings at KCL, Surrey Street, on 31st October. Tickets available online by clicking here, and they'll cost you a relatively hefty £14.85 per ticket + postage on top of that. Of course, you'll recoup some of that outlay through not being in at home while gangs of feral kids terrorise their neighbourhoods, as they swallow the increasing commercialisation of Hallowe'en. Save your energies for Bonfire Night, kids, and celebrate an early victory in Parliament's War on Terror instead. Where were we? Oh yes, Sufjan Stevens. Tickets are sure to go quickly, so be sure to get your tickets sharpish. Big thanks to regular reader Pollo for the information.

Another hot ticket is the one for self-professed 'Marmite-y' The Sways, who play Water Rats this Saturday. Really worth seeing for being utterly different to anything we've heard, erm, ever. Which is one way of saying we have no idea how to describe them to you. Our previous interview with them might give you a better idea but trust us, if you're a bit bored with the indie mainstream at the moment, you really do want to have a look at The Sways.

Moving to the immediate present, a reminder that The Schla La Las are having their launch party at the Spitz tonight, in support of their debut EP. Discounted entry of £4 is available to Londonist readers, courtesy of The Spitz, as long as you turn up before 8.30pm with a print out of Londonist. There's also a competition to win a copy of the aforementioned EP. More details here.

Those of you who were choosing to go to see The Colonies play at Rendition at Bed Bar tonight should take note that this gig is no longer taking place, due to the Bed Bar closing down.

And finally, in today's veritable mixed bag of an MMN, a gig review from Londonista Ted: 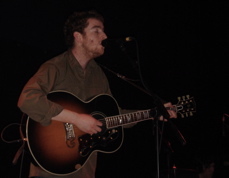 The last time this Londonista chased skirt one weekend at King's University bar he made a mental note to bring his mountaineering gear if he was ever allowed back in - for when the lifts are not working, the 104 stairs [he counted] that you have to scale to get to the bar should be labeled as a health risk.

However such physical excess was rewarded twice fold by him managing to catch the warm up act - Liam Frost. Alone with his guitar, in front of an already packed floor, he shone. Confidently combining melody and sharp lyrics, with some of the best finger-picked acoustic guitar London has heard in ages. When asked by the crowd mid-set, 'Got any CDs?', he replied, 'Thats someone else's job'. Not for long, Frost will sell CDs by the bucket-load. The record execs might want to give him a bath at some point however.

Stephen Fretwell took to the stage at around 10pm with guitar held at a Dylan-esque height and was greeted by a whirl of camera flashes that belied the venue's size. Due to the popularity of his debut album 'Magpie' he won't be playing venues of this scale again. It was a rare opportunity the whole crowd was glad to be part of. He silenced them all in submissive bliss by playing two songs alone, and then, backed by his band - superb skittle drums, bass and piano/organ that gelled harmoniously - he brilliantly worked his melodies from crescendo to deafening silence with the crowd listening on in the palm of his hand. Magpie is a superb debut album but is all the better with extended improvisations that live performance offers. Fretwell, who recently supported the brothers Gallagher on Oasis' UK tour, finished the set with the crowd pleasing 'Emily' and 'New York'. He then thanked the crowd and walked off, we are sure to much greater things.