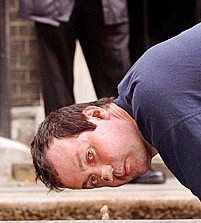 What is to be done with 'artist' Mark McGowan?

This self-serving, talentless no-mark has become a regular sight in our newspapers and (we regret to say) on this site.

First he pushed a peanut seven miles through London with his nose (a protest against student debt), then he sat in a bathtub full of baked beans to try and defend people's right to a full English breakfast, then there was 'pulling a bus wth his toe' stunt (a protest against London's transport system that one).

Then came the eating of a fox (something to do with 'crackheads' we seem to remember), and the attempt to catapult a 76-year-old pensioner into space (to highlight the way in which the young mistreat the old).

And lest we forget the botched attmept at cartwheeling from Brighton to London with rocks tied around each ankle and 18 sticks of Brighton rock cellotaped across his face in protest against people who take pebbles home from the beach, or the 'hilarious' car keying prank that he pulled.

Possibly McGowan's most infamous stunt was the 'running tap' installation to highlight water wastage. That one really captured the imagination of the national press and caused a bit of an uproar right across the country.

Obviously McGowan is not one to let a good formula go to waste and he's now reviving this contradictory form of environmental protest by turning on a car's engine for eight hours a day in a car park in Peckham:

"I know I will be upsetting people. What about car owners who drive to the local video store or the corner shop or in fact the school? How many times do you see mums leaving cars running outside the school gates or taking one child 800 metres to school in a 4x4?"

If you want to read the pros and cons surrounding this story then you can read the BBC article, we're loathe to give this tool more exposure than he's already getting.

Although we will make this promise here and now: "We, Londonist, hereby swear that from this day forward we will no longer publish any information regarding the self-proclaimed artist, Mark McGowan, as it is quite obvious to us that he is a bit of a dickhead".

Let that be and end to the matter.