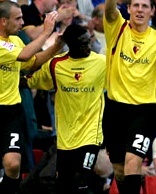 It's been a while since the Londonist caught up with our non-'Premiership' teams, but it's back and with a snappy new title to boot.

Mid-September and few would have predicted Watford to be in 3rd place. The Hornets narrowly lost to table-toppers Sheffield United last week, but a Milk Cup win over Wolves mid-week should keep that bubble from bursting for the moment.

Adie Boothroyd hasn't been resting on his or anyone else's laurels, by bringing in Sir Les of Tottenham on non-contract terms along with Villa's firecracking youngster Gabriel Agadoodoodoo, lumbering lummox Trevor Benjamin, and Stoke stopper Sanna all on loan deals.

QPR are settling in nicely into their mid-table slot like a favourite comfy armchair. However the injuries are mounting up for MC Holloway, losing both Martin Rowlands and Mauro Milanese this week.

Aki's back! Not in the playing-for-Crystal-Place sense, but in the thoroughly-entertaining-weblog sense.

After two wins on the trot, Millwall are not only off the bottom of the table, but in the 3rd round of the Milk Cup. Who'da thunk it? Colin Lee's men face their easiest game of the season on Saturday at home to the hopeless Cardiff City.

News hot off the press is that Gary Johnson has jumped ship from Yeovil to Bristol City. Bottom of the table City (or second-from-bottom if you were to include the MK Franchise) travel to Brentford on Saturday, and could be something of an unknown quantity for the flying-high Bees.

Just when you think things are going well, Old Father Inconsistency comes back round to bite you on the bum. Same old story then this season for the Orient - rubbish home draw follows great away win follows rubbish home defeat.

Hey Ho! Let's Go! Barnet started the season like a rabbit out of a trap with 10 points out of the first 12. Then it all went entirely pear-shaped as the Bees have only managed 1 point from the last 5 games. An encouraging win in the Milk Cup mid-week against Division Two Plymouth should hopefully raise faith around Underhill for the weekend's visit of Rochdale.