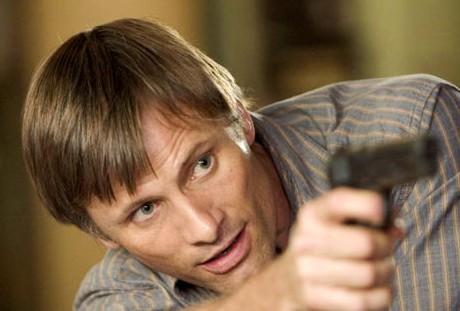 There's only one film we could kick off with this week and that film is...Deuce Bigalow: European Gigolo.

Ok, not really. Although we will get to that eventually. No, the film we're most interested in this week is David Cronenberg's A History of Violence.

It's arthouse meets Hollywood with Vigo Mortensen, so it really shouldn't work. But somehow Cronenberg seems to have pulled it off, that is if this week's broadsheet reviews are anything to go by.

The Times kicks things off with a four stars and the claim that this film is "the most entertaining picture of David Cronenberg’s career".

The first clue we get that this film might be more than your run-of-the-mill film noire rehash (ok, the second clue then, the first being the phrase "Ed Harris pitches up with a missing eye") is the fact that it's adapted from a graphic novel and the that Cronenberg has decided to "wittily adopt the comic book style of freezing split seconds of violence into lovingly painted stills".

Wow, a director who takes a graphic novel and actually uses the artform as inspiration rather than butchering the source material entirely. We love you David!

According to J-Kris (we're giving all the reviewers 'street' names this week) "William Hurt is marvellous" and "Harris is sublime". Mortensen meanwhile gives the performance of his life.

There's a chorus of approval over in the Independent too where Anthony Quinn (or 'Dr Quinn, Medicine Man' to his homeys) adds another four stars to The History of Violence's tally and links the film back to Cronenberg's past work while he's at it:

The trauma of lives split in two drives Cronenberg's best work - think of Jeremy Irons' twins in Dead Ringers, and Christopher Walken's transformation from coma victim to clairvoyant in The Dead Zone.

Mortensen's performance again comes in for special praise ("Ever since his Aragorn in The Lord of The Rings Mortensen has been a go-to man for understated virility and integrity that simply cannot accommodate the possibility of deceit") although Hurt doesn't quite cut it here, because he apparently "subtly poisons" the film with his "camp impersonation of cruelty".

Peter Bradshaw (P-Braddy) in the Guardian completes the four star hat trick: "A rather gripping and stylish film, a kind of black serio-comedy. A little middle-of-the-road for Cronenberg, maybe, but for him this has turned out to be the fast lane."

According to Pete, William Hurt's performace is "terrifically funny" so that's two against one in favour of Hurt, and there's also this little teaser from Pete that, for us, makes this film a 'must see':

He gets an unreality effect, a note of superhero or secret-identity fantasy...On the strength of this, Cronenberg might well find himself offered the next Spider-Man movie.

Moving on, it's difficult to know what other films to focus on this week, because frankly everything else looks rubbish.

All things considered we should take a look at Goal but consider this paragraph from James Christopher's review in The Times:

Danny Cannon’s film is aimed at diehard fantasists. It dribbles past a midfield packed with cynical commentators, nutmegs a couple of atrocious setbacks, and scores a romantic winner with the last kick of the game. Small boys will go weak at the knees.

Do you want to read any more of that kind of thing? Thought not.

And then there's Four Brothers: Mark Wahlberg slowly crucifying his career in front of your very eyes:

Just when we were deciding to love Mark Wahlberg. Just when we were preparing to clasp his buff torso to our forgiving bosom and tell the sobbing and penitent star that it was all right. After his turn in James Gray's underrated The Yards and a funny performance in I Heart Huckabees, everything was looking good. Then he drops his Calvin Klein underpants, squats and gives us this.

That's Pete Bradshaw in the Guardian if you hadn't guessed already. He gives it one star and so does everybody else.

So what about Deuce Bigalow - European Gigalo...is there even any point in glancing in the direction of this seemingly unneccesary sequel?

Well not according to Wendy Ide (Wild Girl Ide?) whose one star review in The Times claims that after watching this film "You’ll want to drink a pint of bleach just to get rid of the bad taste it leaves in your mouth."

The Independent treads much the same line with its own one starrer although there's less self-harm involved: "The quotient of gross-out gags and sniggering puerility is toxically high, yet once again Schneider does just enough to raise the prospect of a second sequel. I'd very much like never to see it."

So it's over to Pete in the Guardian to complete the triptych of trashings...or so you'd think: "Deplorable. Reprehensible. Absolutely appalling. I am referring to my own behaviour while watching this very immature comedy from Rob Schneider. I giggled guiltily throughout."

Yes it's an unbelievable three stars from P-Braddy who seems to employ the phrase "breathtakingly offensive" as a compliment. Weird.

We have to say though that our favourite review of Deuce Bigalow - European Gigalo comes from the esteemed Roger Ebert in the Sun Times. He gives the film zero stars and concludes his article with one of the most brilliant phrases ever to grace a film review:

Speaking in my official capacity as a Pulitzer Prize winner, Mr. Schneider, your movie sucks.

You have to read the whole thing to get the full effect, but you get the idea.

In the world of cimematic goss' this week Kirsten Dunst has let it slip that the villians in the next Spidey film (not to be directed by Cronenberg) will be...

Meanwhile in the file marked 'slighlty disturbing' this week is the news that Renee Zellweger is signed on to play Beatrix Potter in an upcoming biopic. Worse still Ewan McGregor is to play the love interest and there will be (oh, the humanity) "animated sequences".

Breaking news: someone was arrested on the set of The Da Vinci Code trying to get Tom Hanks' autograph. Weirdo.

Trailer of the week is for the low budget, indie horror flick Unholy.