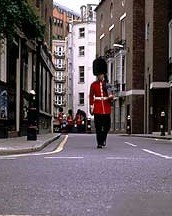 If there's one thing Londoners don't do enough of it's walking. Ok, so we're not quite at Los Angeles standards yet but (as Ken will no doubt tell you) a lot of us still rely too heavily on our cars and even getting the Tube means we don't get to see enough of the city itself.

But help is at hand, because artist Francis Alys is a walking expert and lately he's been pounding the pavements of the capital for Artangel. The resulting exhibition Seven Walks goes on display today.

The walks are enacted in different parts of the city – Hyde Park, the City of London, the National Portrait Gallery, the streets close to Regents Park. Involving a diverse range of collaborators from 64 Coldstream Guards to London commuters, Alÿs delves into the everyday rituals and habits of the metropolis. The ensuing films, videos, paintings and drawings are presented together in Alÿs’ first major public presentation in Britain.

It's also quite fitting that the exhibition is being presented at two of London's more architecturally distinctive buildings: 21 Portman Square and the National Portrait Gallery.

Although the NPG is only showing the Night Watch section of the project it should prove to be a very popular exhibit if only for the footage of a fox "strolling around the National Portrait Gallery after hours" which was caught on CCTV and used by Alys to produce a 20-minute film of the fox's exploits (the fox's name is Bandit by the way...aaahhh).

It's also free admission into The Nightwatch project, located in the Main Hall of the The National Portrait Gallery.