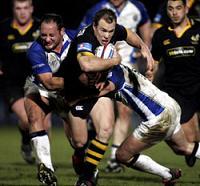 There is something different about Wasps . A certain atmosphere, an x-factor perhaps. You can see it when you visit their training ground in Acton and bump into the likes of Alex King and Lawrence Dallaglio, dressed down in mis-matched bits of training kit and happy to stop for a quick chat. No pretence, no nonsense, no focus taken of the grand prizes.

Matt Dawson arrived at Wasps as a World Cup winner looking for a new challenge, and found a club where you are immediately made to feel welcome, but you are also made to understand that you are there to work hard and gain respect. Dawson describes Wasps as "a very honest place to work" and one can imagine that the likes of Dallaglio and coach Shaun Edwards don't hold back whenever a player is in urgent need of a quick blast of reality.

There are other aspects to this club's individuality. In a Guiness Premiership that sees its participants looking increasingly towards foreign talent, Wasps maintain a steadfast belief in the development of English talent. England's 30 strong squad for the Autumn tests is announced today and it is likely to have a strong Wasps presence. Joe Worsley, Simon Shaw, Josh Lewsey and Matt Dawson will be there, as should Stuart Abbot and Tom Voyce. The dynamic Ayoola Erinle could sneak in, and if they were both fit, veteren Dallaglio and newcomer Tom Rees would also be making the trip to HQ. Impressive stuff. However there is one other Wasps player looking to make his England debut, but he didn't learn his trade on our native playing fields. He was born and raised in New Zealand, his name is Mark Van Gisbergen, and he is about to become England's new fullback.

We caught up with Mark after training, and found him to be so laidback, he's almost horizontal....

Am I talking to a future England fullback?

There’s been talk in the papers of you being able to play for England, is that actually the case?

I think that in September I will have been here for three years, so on that status I’ll be eligible to play for England.

Has it ever been mentioned seriously to you or is something that you’ve thought seriously about?

No…..basically all that I’ve heard is the media and the papers talking about it, and a few of the boys, but that’s about it really.

Is international rugby a big priority for you, or is it not that important?

I think it would be great and it would be an honour, but at the moment I just don’t look that far ahead. It hasn’t happened and whether it will happen, I don’t know.

So you’re not worried too much about it?

I’m just playing for Wasps at the moment, and I’ll go from there really.

Ok. After three straight Premiership wins and a Heineken Cup, is it all downhill for Wasps now?

What else is there left for this team to achieve?

Does it get harder to retain the Premiership, or do you think that with perhaps Leicester being a bit weaker this time out, you might get an easier ride?

You never have an easy ride mate! It’s a great competition isn’t it? It’s amzing how we’ve done the last three years and we always want to win it, but who knows what’s going to happen?

Do you have any personal objectives that you set yourself? Points or tries scored or anything else?

No, I’m not really that sort of person, I just want to play, cause I like playing!

Are you pretty laidback?

Yeah….I guess so yeah…I just want to be successful basically, we play the game because we love it…well I do anyway…so yeah….that’s all I worry about.

I saw that you were trying to sell your campervan on the Wasps website. Have you managed to flog it?

It looked very nice, why were you selling it?

So what are you driving now?

So you’re moving up in the world then….

Yeah…but it was good fun having it though!

If you had to fight one of them bare-knuckle, who would it be?

Shaun scares me too much. And he’s my coach.

Yes. All the boys are from London, we train here, we’re definitely still a London club.

We let Mr. Van Gisbergen stroll off to drive home in his new Saab and as we were about to depart, we observed All Black legend and Wasps forwards coach Craig Dowd also getting ready to go home....on his bicycle. See how we told you they're a bit different?

Thanks to Mark Van Gisbergen and Fiona Hackett at Wasps.