Some Films About Musicians 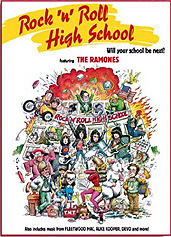 Ever since Al Jolson opened his gob in the Jazz Singer the worlds of cinema and rock'n'roll have become inextricably linked. You're going to have to go with us on the Jazz Singer rock'n'roll analogy but you know what we mean. Almost 100 years later and we have movie stars wanting to become rock stars (Lyndsey Lohan anyone???) and rock stars wanting to become movie stars (Gene Simmons and half the cast of Singles). Didn't it used to be simple? If you wanted to see folks singing in the movies you just went to a musical. Something like Meet Me In St Louis or South Park The Movie. But those wise folks in the film studios decided to blend movies and rock'n'roll for an even bigger buck so we had a string of Elvis flicks, Beatles reels, The Ramones in Rock'N'Roll High School and ultimately the enormous stinking pile of turd that was 9 Songs.

Concert films generally don't fare much better although there have been some notable exceptions: Neil Young's Rust Never Sleeps, R.E.M.'s Tourfilm, Talking Heads' Stop Making Sense, but compared to the glut of badly shot rubbish and the difficulty in achieving any kind of live atmosphere on screen, unless you're watching with a couple of thousand fans, these are few and far between.

There has, however, always been a home for music on the silver screen and that's been the rock doc. We've had some tasty treats delivered to our local multiplexes of late: Metallica going wimpallica in Some Kind Of Monster, The Ramones hating each other in End Of The Century and The Brian Jonestown Massacre going just a little nuts in Dig. All good. And now there's Uncontainable, A Music Documentary Season running at the Curzon Soho from tomorrow until Saturday 8th which fits in nicely with The Minutemen and Kim Gordon flics we already told you about. Featuring a line up from Bright Eyes and Wilco through Jim Rose to Sonic Youth and Dinosaur Jr there's a little something here for anyone of discerning taste. If you'd rather catch Lohan in the new Herbie film then perhaps you should stop reading Londonist NOW. The line up's below. Click on the links for further details of each screening and tickets.

Arena: Dylan In The Madhouse & I Am Trying To Break Your Heart - A Film About Wilco

DIY Or Die: How To Survive As An Independent Artist & Charm