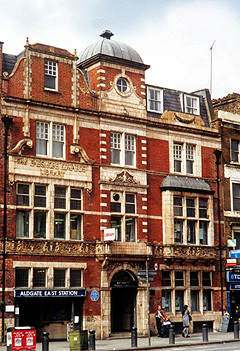 This past weekend saw the doors close for the final time at the 113-year-old Whitechapel Library.

The library was founded 1892 by the Liberal MP J Passmore Edwards (there's a nice picture of the man himself here) and quickly garnered a reputation as "the university of the ghetto".

Saturday's Guardan reported on the closure, reminding us of the scores of notable men and women who have perused the lbrary's shelves:

Jacob Bronowski, scientist and historian, learned his English there, and went on to become internationally famous for his television series The Ascent of Man. The artist Mark Gertler borrowed books on art and drew on sheets of notepaper in the reading room.

Playwright Arnold Wesker, brought there first as a child, spurned the Beatrix Potter shelf but wept over repeated readings of The Wind in the Willows.

An equally informative article in last week's Telegraph only adds to the list:

Isaac Rosenberg met future artists such as Mark Gertler and David Bomberg. It was here that the novelists Simon Blumenfeld and Willy Goldman, historian Jacob Bronowski, and playwrights Arnold Wesker and Bernard Kops educated themselves. Kops wrote a poem about the place in which he confessed: 'The door of the library was the door into me'.

The library's place in the community is to be taken up by the planned Whitechapel Idea Store which will contain (among other things) "more books, CDs and DVDs - over 17,000 new items as well as stock from the existing libraries, free internet access, a range of state-of-the-art learning spaces and classrooms, a creche for the children of learners, specialist spaces for teaching dance and complementary therapies..."

And the library's space is being taken over by the Whitechapel Gallery, which sits next door (another Passmore project). The gallery will restore the building (which is in a pretty bad state by all accounts) in order to increase their gallery space, and build an education centre.

Theres a nice quote in the Guardian article from one of the library's staff members:

"It's good to know the building has at least found a good new home. The old Limehouse branch is just sitting there derelict. Sometimes you do feel these poor old libraries are as forlorn and redundant as socialism in New Labour."

If you want to read a bit more, there's also this excellent article about the library by Michael Kustow from The Jewish Quarterly.