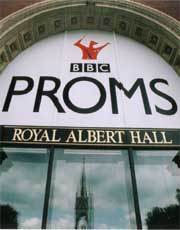 As week eight of the nine-week Proms festival begins, perhaps your endurance is beginning to flag a bit. Perhaps the Royal Albert Hall is becoming a bit over-familiar, the queues are starting to seem a bit more torturous, and you're beginning to look forward to things like having to buy tickets in advance, and paying more than £4. If that is the case, one name should help keep you going through this week: Bo Skovhus.

Providing less eye candy, but just as exciting, is tonight's Stravinsky/Messiaen/Boulez program at 10pm. The Messiaen Trois petites liturgies are delightful, and although we've never really been convinced by Boulez's cummings ist der Dichter, we're willing to give it another chance. Incidentally, the three sacred works by Stravinsky would have made a much, much more effective, provocative and revealing pairing with the Arvo Part works on that concert we complained about two weeks ago, but no one asked us.

And speaking of provocative pairings, we have high hopes that the Royal Concertgebouw Orchestra concert on Friday, in which Brahms' first symphony is juxtaposed with the Lutoslawski Concerto for orchestra, will cause us to hear both pieces in a new way.

Not that we have any categorical objection to straightfoward consistency in programming, like the all-English, all-Renaissance program by The Sixteen late night on Thursday. The reason this concert is not to be missed is their finale, a performance of Thomas Tallis's 40-voice motet Spem in alium, with its eight choirs spread around the hall. (How an ensemble called "The Sixteen" will sing a 40-voice motet is probably best not dwelt upon.) This is a piece that is fundamentally impossible to record, so any live performance is always a precious event. But this performance might just be the last before the publication of the Italian 60-voice Agnus Dei by Striggio (the composer who inspired Tallis to write the motet in the first place) recently rediscovered by a musicologist in France. See it before it becomes only the second most elaborate piece of Renaisance polyphony.