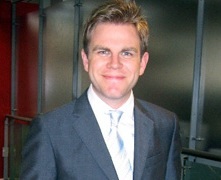 A couple of weeks ago we ran a couple of stories about BBC's London news reporter Matt Barbet and what seemed to be a growing legion of 'Barbettes' - Barbet groupies who were watching Matt on the telly for more than his incisive reporting skills.

At the end of one of those posts we suggested that maybe we should interview Matt to try and get to the bottom of this phenomenon.

Well it seems someone at the BBC reads our website and within a day or two we received a very nice email from Mr Barbet saying he would be more than happy to answer a few questions.

So, Barbet fans, hold on to your knickers, as Londonist present the ultimate Matt Barbet interview.

29; Presenter/Reporter, BBC London News; born in Chester and brought up in North Wales; living in Highbury, working in Marylebone.

How did you get into newsreading – is it something you've always wanted to do?

I didn’t always dream of being a newsreader, but I did decide to become a journalist when I was at university in Cardiff. I’d had a go at the student newspaper and radio station, and really enjoyed it, so I decided to stay on for another year to do a post-graduate course in Broadcast Journalism.

That qualification, along with getting up at 4 on a Saturday morning – Alan Partridge-style – to get some valuable experience at a local station, set me on the right path.

Be honest, do you have to do a lot of work behind the scenes, or do you just go in and read the autocue?

I do have more involvement with putting the news together than you might think – and I’d be bored to death if I was just a ‘gob on a stick’.

The biggest names would be David Beckham and Al Pacino – but I most enjoyed talking to Vic Reeves and Mark Rylance.

You’re a Liverpool supporter living in Highbury – what’s that like?

Not too bad. At least it’s not Old Trafford. When they celebrated winning the FA Cup, or the League, I kept the shutters closed though.

Does (London weatherman) Peter Cockroft have any limbs? They always appear to be out of shot. Is he hiding something?

I can confirm he has two pairs of fully-working, quite normal limbs and has nothing to hide, except his wide range of brightly-coloured all-weather gear.

Have you got a favourite ‘news movie’? Broadcast News, All the President’s Men, erm... The Shipping News?

I have no favourite, although I bought (70s news movie) Network on DVD. It looks a bit dated now, but fairly funny. All The President’s Men was good, but more about newspapers. Broadcast News and The Shipping News I haven’t seen.

And talking of films: was Anchorman: The Legend of Ron Burgundy a realistic snapshot of the television news industry? What about The Day Today?

I’d love to say Ron Burgundy is spot on – but of course it isn’t. Maybe in the 70s, the newsreaders cultivated luxurious moustaches and got into fights with the “other side”, but not now. I don’t even work on my triceps before bulletins. On the other hand, I was a huge fan of the Day Today when it was first broadcast, and now I work in news, I can fully appreciate how close to the truth it really got. It was a work of genius. So much so, that I think most people doing this job has probably done something a bit Day Today at one time or another.

Do you get to choose your own ties? If so, what do you look for in a good tie?

I choose them – although I wouldn’t like to generalise, and would pick each tie on its individual merits! (Paul Smith is good though)

Do you have to get special vocal training to get on the BBC news? Or do you just make a special effort to sound ‘newsreadery’?

I had a little bit of voice training a while back, but I can honestly say I sound pretty much the same on-air as off-air. A few newsreaders don’t though.

Have you ever used your authoritative newsreader voice purposefully to get something you wanted?

Were you aware of the Barbet fan community that exists out there?

Not until I saw your website. I’m still not convinced.

Before we get to the London-specific questions, here are a couple of queries from a few Barbet fans who emailed us after we told them we’d be interviewing you:

"When you covered Glastonbury in 2002, your hair was more closely cropped, but these days it has more volume and height. Is this change motivated by a desire to look less boyish now that you're not covering entertainment news exclusively anymore, or do you think slightly longer hair for men is a more general trend?"

Impressive attention to detail in this question, but I’m also a bit scared by it. No comment.

"Has anyone else has ever told you that you looks a bit like a monkey (in the nicest possible way!)?"

"Why do you always have a cheeky, little glint in your eye when reading the news?"

It must be the studio lights.

Eating out locally, I like The House, Rasa and Ottolenghi. The one time I went to The Wolesley – just for coffee and cake – was great, so I’d love to go again. Milk and Honey does the best drinks anywhere.

I like keeping an eye out for Banksy’s handiwork, so I guess that.

Have you ever thrown up on the tube?

I suppose I should say “reporting on it”, but who’s going to be watching?