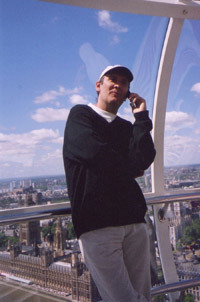 It remains unshakable, confident, sprawling, determined. There is a spirit and a soul here not found in other places, a remarkable spirit that makes London so special and civilized, even when things go terribly wrong like yesterday.

Bertis Downs, occasionally known as the fourth member of the band R.E.M., posted his thoughts about the London bombings on the Huffington Post website the day after they happened. Here, R.E.M.‘s manager, legal counsel, and advisor, talks to Londonist, paying tribute to a capital with which the band have been closely associated for 22 years - from playing their first shows at Dingwalls and The Marquee, to last month's majestic Hyde Park performance.

Talking to Bertis is an immensely pleasurable experience. Affable, relaxed, open; you wouldn't have thought that he'd just guided the band and crew through 120 shows in 45 countries, fitted in a performance at Live 8, dealt with a bout of Mike Mills flu, and rescheduled the Hyde Park show whilst tearing up an entire North American tour to play the Vote For Change gigs.

Bertis assimilated the mantle of manager after Jefferson Holt left the band in 1996. He’d first seen them play during his second year of law school at the University of Georgia in their home town of Athens, where he still teaches today. On graduating he started helping them out on a voluntary basis, assisting with contracts, trademark issues etc. By '85 / '86 it had turned into a real job when they’d figured out there was a career for all of them.

Since the earliest days, if we were sitting about in '83 / '84 wondering whether we going to take time off, were going to tour, where we were going to play, what promoters we should use, what the ticket prices should be, whether we should take sponsorship or not; they've always looked to me for advice for that stuff... the direction of the business.

It used to be the six of us talking around a table, and then it became the five of us. After Bill (Berry, former drummer, now a farmer) left, it became the four of us.

You get the picture the operation still runs as a small, tight family unit, with Bertis at the helm steering the organisation through occasionally choppy seas. Technology aside, there's not much about his role that's changed, he's wary of calling himself the band's manager and you sense that the excitement of those communal early days hasn't abated in any way.

With the band's homes now spread from Athens to New York to Seattle, most of his work now takes place by email, with about 99% of the decision making being done without band input. Unless of course they're are asked to dash over from Switzerland to play Live 8, or rearranging their schedule to join Springsteen, Pearl Jam and Bright Eyes on a tour to raise voting awareness in the marginal states, as occured during last year's US Presidential election. The latter particularly, eschewed the traditional linear schedule to find the band and somewhat disgruntled crew bunny hopping across North America on a schedule that looked like a bad diagram only to start all over again a few days later. Or, of course, they might suddenly find themselves trapped in London on the 7th July. Bertis disputes the term trapped.

I guess you could say we feel like citizens of the world who are from America, -we never felt a sense of being Americans holed up in London. We were disappointed having to postpone the shows, but we knew it was the only thing to do and that a lot of others were dealing with matters far more serious.

I really got... not choked up, but a little tingly when I sat on the stage on the 16th, a show that by any account had lost its lustre because of the bombings... I sat there on the stage before the band went on, the sun going down, a beautiful scene with all the people out there and someone had put up a sign saying Thank you for staying.

Bertis was on holiday in London with his family at the time before heading up to St Andrews to watch the golf (You could learn the entire Chinese language in the time it takes to play golf, he offers, helpfully) and obviously loves the city very much and knows it well. After having spent so much time over here, could he draw up an R.E.M. Lonely Planet guide?

I like the Pelham and the Charlotte Street hotels, also the Milestone, it’s nice to be near the park. One of my favorite places is St Martin in the Fields at Trafalgar Square; the services and the candlelight concerts are very moving and very inspiring. An amazing building and a church with a serious and effective mission in the area it serves.

And the rest of the band. Where should we go Stipe spotting?

Everyone is different. Depending on time and circumstances, you will see the guys same places you see others....at the Tate Modern, shows, the parks, dinners, pubs...pretty much the same as everyone enjoying the greatest city in the world.

Having played pretty much every major venue in town going, as well as the occasional surprise or fanclub gigs at diverse locations such as The Borderline or St James's Church in Piccadilly, we wonder if there's anywhere new for the band to play over here.

Who knows? Don't want to give away any surprises, no plans for now but someday we will figure something out... something different, something cool. I hope!

Out of Time? Never.

R.E.M.'s first year long tour since the Monster trek in '95, was in itself a surprise jaunt.

The ’95 tour just about killed everyone, explains Bertis. We did three trips to the hospital: for brain surgery, gut surgery, and hernia surgery in about a five month period. At the end of it we said we'd never do it again.

The stresses of that tour forced Bill Berry (who had almost died onstage)'s departure. Was it this and the way in which the band were forced to re-evaluate themselves, rather then the success of Losing My Religion, that defines the split in the band's history, we ask.

There are two kinds of people, those who divide things into two, and those who don't. We've been around for 25 years. I think we're allowed three periods.

The whole apple cart got shook up when Bill took off and that's when they had to look and say are we still ok about this. They'd already written the lion's share of Up and when Bill left, they kind of felt like it was unfinished work to be done. It's not like it didn't have its problems and troubles that are well documented, but they asked all the big questions - do we still want to do this, are we still relevant, does this still make sense to press on. As of 9 / 10 years later, well it's been almost eight years since Bill left in the summer of '87.

The post Bill album reviews may no longer garner as much praise as the two classic Warners records that define the second incarnation of R.E.M. but the three legged dog, as Bertis refers to the band, found a new lease of life as a touring band. Having lain low for their two most commercially successful albums: Out Of Time and Automatic For The People and suffered the rigours of the Monster tour, they've been on the road regularly since the release of Up. And although the band are still regularly penning classic pop songs such as Imitation Of Life and Leaving New York they're also delving further back into their archive, a happy consequence of playing the Greatest Hits shows in 2003. With set lists being shaken up on a regular basis, and a palpable sense of fun on stage this last tour has seen them on fiery form.

While the year was great, there's nowhere greater to play shows than the banks of Loch Lomond, the Castle in Dublin, and Hyde Park. We all knew they'd be some great shows, and damn, they were... It felt like the best R.E.M. tour ever.

Even The Guardian agreed, awarding 5 stars for the Hyde Park date, a bittersweet show where the exhaustion and exhilaration of ending the tour was tied up in the tragic events of the week before. Bertis remains surprised that with an entire crew ready to head off on other tours, they only lost two crew members because of the new date. There was never a suggestion that the show be cancelled but had the band made any concessions to the events of the 7th?

The band felt that playing was the statement and there was no need for grand gestures. Just doing the show was the important thing I think.

Those who were there that night will no doubt agree. The highlight of the set was a jaw dropping performance from Patti Smith on E-bow The Letter that for a while, was on course for bringing the show crashing to its knees as something was going wrong with the sound onstage leaving Smith and Stipe visibly disturbed and upset. Bertis remains tight lipped about the exact details:

Songs with special guests are always a chancy thing. It never felt too terrible, - fairly typical glitches that came around in the end. It is an esoteric song and her part is always different depending on the occasion and the singer...sort of like Country Feedback.

So what next? Having toured and recorded pretty constantly since '97, the band will the year off to rest, recouperate, build dinosaur collections and play in a few side projects. Meanwhile Bertis continues to run the office, teach, remain active in local and national political issues and no doubt play a few rounds of golf whilst waiting for album number 14. Any chance it's going to be 20 short sharp punk numbers like I'm Gonna DJ? Probably not.

Well they always say what they're going to do next and it's never that!

Our thanks to Bertis for taking time out of a busy schedule to talk to us and to David Bell at R.E.M.HQ for arranging everything.