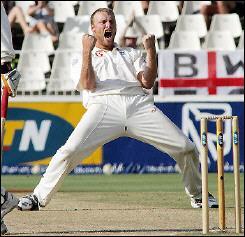 The second Test of the Ashes series starts today at Edgbaston, but you dear reader, are most probably stuck in front of your monitor at work and not willing to risk a P45 by feigning a coughing fit, running out of your place of work to the nearest hostelry and purchasing a refreshing beverage before finding a seat with the perfect view of the big screen action.

That's fair enough, but seeing as you're currently perusing non work related material, we're guessing that you are in a 'mañana' kind of mood (Thursday IS after all, the new Friday)and thus we recommend that you follow this link to the Guardian's online over-by-over coverage of the match. 'What!?!' - we hear you cry, 'isn't reading a live written commentary cricket match on the internet just a little bit....sad?'. You may have a point (and we're not very qualified to make an objective decision, having once watched an entire football game on ceefax), but we think you should give it a try, as, you see, it really is a little bit addictive.

The commentaries are also phenomenally popular, which is understandable, seeing as they're funny, well-written and beautifully interactive, but we still wanted to find out more about how they became so popular. And to that end we caught up (in an electronic sense of course) with the three writers responsible : Sean Ingle, Lawrence Booth and Rob Smyth.

Just who are you people? And why do you do this?

SI: I'm the sports editor of Guardian Unlimited, Rob and Lawrence are long-time OBO writers who are now freelance. The OBOs started by accident - I was doing a minute-by-minute football report in the World Cup and happened to mention I had an eye infection. At that time we didn't put our email details online, but lots of people guessed mine and started writing in with solutions. Quickly we gained notoriety when Gary Lineker read out parts of this US v Mexico report on Match of the Day,

claiming it was from a real American website - when it was just our report which had virally gone round the web.

LB : I'm a freelance journalist who writes mainly for the Guardian. I'm also a cricket nut. I do it because it pays the mortgage and because it's great fun - not necessarily in that order.

How long have the OBO's been going?

LB : The first OBO I remember doing was England v India in the summer of that year. The response was pretty good, but mainly cricket-oriented. The format really took off during that winter, with the Ashes (I was up all night by myself in the Guardian offices watching it on a TV that frequently broke down) and the World Cup. That's when we thought: we could be onto a winner here.

And just how popular are you?

LB : The number of page impressions generated by a day's OBO usually dwarfs everything else on the Guardian website.

You're well known for your razor-sharp wit and long-running gags/themes. Any that you're particulary proud of?

SI : Too modest/forgetful to mention any of mine - but lots in the 2003 cricket World Cup were very good. And I liked this one, where people set up a petition to keep Lawrence at GU after EU legislation prevented him working for us.

LB : Hmm, that's a tricky one. The readers should get more credit than they do really, because they're the ones who write in on all manner of irrelevancies. We had a thread running recently when a guy emailed in to say that he fancied a girl at work and should he send her a text asking her out for lunch? The response was overwhelming and his love life became a crucial part of the OBO for the next few weeks. Even now, we still get people wondering how George is getting on. In terms of my own personal one-liners, I'll settle for the time a reader wrote in to tell me off for not doing the coverage properly. "Come on dude, what's with the silence? You haven't written a word for 20 minutes!" I wrote: "It's called lunch, Tom."

RS : The OC, dude, although that has subsequently and not unreasonably been banned.

A big part of the commentaries is the email correspondance that you receive. Londonist has started to receive a lot more emails lately, and we've noticed a few more the kind that are written in large block capitals that advise us of the end of the world/the benefits of genocide/nigerian businessmen who want us to look after their cash. Do you get many odd/startling/smutty/abusive messages? Any that stand out?

LB : Not as many as you might think. Odd, certainly. People will do anything to get on the OBO, even if it means revealing to their bosses that they are spending all day reading the cricket rather than doing work. Smutty, no, although I did have a two-year relationship on the basis of meeting an OBO reader. Abusive, very rarely. I think of it as one big family - people understand the humour and know not to take it too seriously.

LB : Anything that involves putting your hand up, coming to the party or stepping up to the plate. Preferably all three.

And how about your favourite cricket idiosyncracities (e.g. Shepherd standing on one leg at 111 etc etc)?

LB : I think lunch and in particular tea are magnificent quirks. But it only occurs to me when I explain cricket to someone who knows nothing about it...

LB : Dickie Bird: "Mervyn, Mervyn, why all the bad language? What has Mr Hick ever done to you?" Merv Hughes: "He offended me in a former life."

SI : Eddo Brandes to Glenn McGrath is a bit obvious, but it is a classic.

RS : I quite like Kumar Sangakkara to Nasser Hussain in 2003, when Hussain's place was under pressure: "Bye-bye love, bye-bye happiness, hello loneliness, I feel I'm going to die". Ian Healy to Arjuna Ranatunga had hidden depths as well: "You don't get a runner for being an overweight, unfit, fat c*nt”.

Your cricketing hero and villain?

LB : Wrong. We have some hope. Just not very much. My prediction in the six months leading up to the series was 4-1 to Australia. On the eve of the series, I changed it to 3-1. I think I was being optimistic.

SI : Probably not. But McGrath hasn't got a great record at Edgbaston and if England's batsman got their act together it could yet be close. I'm sure Smythy, who's been predicting 5-0 to Australia for the past year, will disagree with me.

RS : We have got absolutely no chance

Having spent three formative years as a youngster in Australia, Londonist is convinced that Aussie cricketing superiority is all down to the plastic 'kanga cricket' sets that every primary school in the country was given. Are there any other factors that we should be considering?

LB : Sure. The Aussies take their sport far more seriously than the Poms, because sport is pretty well the only way Australia can make its mark on the world map. Sport was meant to be fun. The Aussies have turned it into a matter of life and death - just look at Justin Langer.

SI : I suspect the numbers of people playing the game and having coaching from an early age compared to England certainly helps.

Is Dizzy's mullet good for the game?

LB : It was when it started, but it's boring now. Kevin Pietersen has shown that mustard highlights are the way forward.

Is there any possible way in which the dumping of Graham Thorpe might make sense?

LB : He is about to become a father again (with his new partner) and that might have taken some of the edge off his batting. But not much. The whole Thorpe situation is a farce that reflects very badly on the selectors.

And finally, some questions on our capital....You're karaoke buffs. Firstly, what are your 'signature tunes'? And secondly, which venues in London would you recommend for the purpose of stepping up to the microphone?

LB :In my late teens, my number of choice was I Will Survive, for ironic effect, of course. It used to bring the house down, although possibly because the punters were delighted I'd finished. Now, I'd go for a bit of Frank Sinatra. My Way still sends shivers down my spin. I'd recommend one of the Japanes karaoke dens in Soho.

RS : There's only one suitable crucible: The Feathers in St James' Park, on a Thursday night, full of wasted civil servants whose lives haven't panned out as they'd expect. It's gold. As for songs, Ice Ice Baby, 500 Miles and Overload by the Sugababes usually empty the bar faster than the sight of Freddie Flintoff swaggering to the wicket.

LB : Not a lot. Other than a tendency to occasionally court the wrong person, I think he's doing a great job. The congestion charge is a wonderful thing - and I drive a car.

SI : Tax the rich, more bicycle lanes, knock down 60s-style housing estates. And bring back the Routemasters - I've never seen a conductor on a bendy bus.

LB : The Grace Gates at Lord's.

SI : Covent Garden, third bollard down after you've turned left out of the tube.

LB : Up early to see the sun rise on Waterloo Bridge, a quick sortie into the City with a water pistol, followed by a pig-out at Harvey Nics. I would then spend the rest of the afternoon on Hampstead Heath with someone very close to me.

SI : That's too depressing to think about. Probably by trying to get out of London...

RS : Doing a minute-by-minute report on the end of the world

A big thank you to Sean, Lawrence and Rob from Guardian Unlimited and a massive bout of frenzied shouting and fist-pumping for the benefit of the England cricket team. Londonist is deeply saddened to have just heard that Glenn McGrath will miss the 2nd Test with an injury. Glenn....mate....we feel your pain.