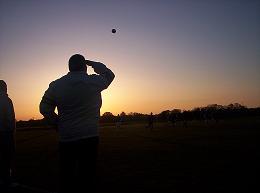 It is, as we're sure you've noticed, summer. You can tell it's summer, as the weather is (reasonably) decent, workmates are coming back tanned from holidays and we are smack bang in the middle of a cracking Ashes series. But watch out, the first sign that autumn is steadily creeping up on us has arrived, that's right......the new football season is about to begin.

It is too short a break. Memories of Liverpool's Istanbul joy and Arsenal's Cardiff timidity are still too fresh in our minds. We want time to really miss football, to be able to start counting the days before it crashes back into our lives. But these kind of pleas can only ever fall on deaf ears. There are shirts and satellite dishes to be sold, column inches to be filled, pub chat to be gassed, money to be made. Modern football is relentless, welcome back to the merry-go-round.

This season, if you can believe it, the hype is going to be even greater. It is a World Cup season, and England are looking odds on to be invited to join the party. Which means even greater speculation, anticipation and self-congratulation. Sceptical about the effect of a World Cup on our national game? Read 'All Played Out ' by Pete davies and think again. Perhaps the make-up of the modern Premiership was inevitable, but the Italia '90 antics of Platt, Lineker and especially Gascoigne helped make it happen.

With a new season upon us, and a World Cup round the corner, you might expect us to be caught up with thoughts of big money transfers, egomaniac Portugeuse managers and the next destination for little Mickey Owen, but...right now we're still thinking about our visit to a small club in East London, and what it might tell us about the fortunes of English football.

Senrab FC are based in Poplar (they take their name from Senrab St in Stepney, which is right next door to Barnes St) and run around 15 teams for young players aged 5 to 17. in April, Londonist went to see their under-16 team play on a ground near Woodford, and whilst we were there we talked to Tony Carroll, the team's coach, the club secretary and the man who built the modern Senrab. Unfortunately, Londonist was forced to learn a harsh lesson on using dictaphones in noisy bars that day, so we were unable to publish the full interview, but we still managed to get some valuable insights on the state of grass-roots football in London, and what it might mean for the England team.

Over the last thirty years, Senrab have produced an incredible roll-call of professional players that includes Sol Campbell, Muzzy Izzet, Bobby Zamora, Lee Bowyer, Ledley King, Jermain Defoe and John Terry, amongst others. Senrab is a talent factory. In fact, our capital city is a talent factory itself. Of the eleven players likely to start in the World Cup for England, six of them are from London (Ashley Cole, John Terry, Rio Ferdinand, Joe Cole, Frank Lampard and David Beckham). Our city, and the country in general, is able to produce talented young players of real international pedigree, and there are many who feel that the current crop are capable of lifting the trophy next July. We can produce talent, no question, and we certainly do optimism, but is our confidence misplaced?

The young players we saw at Senrab, with perhaps a future international amongst them, were strong, athletic players with a good touch. They were impressive to watch, but it was clear to see that the environment in which these young players operated was focused on results, rather than developing technique and tactical awareness. It was good old English football - wham, bam and thank you m'am. That's what we do, and we saw the result of this approach in the recent final of the UEFA U19 European Championship, when England's brave young men were passed off the park by a slick and tactically adept French team. The same problem carries up. Sven Goran Eriksson has the players, but when was the last time you saw England really play?

What is even more worrying though, is the state of the resources that our grass-roots clubs are given to operate with. According to Tony Carroll, Senrab receive minimal support from Tower Hamlets Borough Council, which is absolutely criminal when you consider their amazing record of producing young talent. Senrab is funded by membership fees and is able to keep going through the astonishing hard work of people like Carroll. It is a great club, but it is operating in a country that has sold off 40% of its playing fields over the last 10 years. They wouldn't let that happen in Australia would they?

So what else did we find out? That Ledley King is a top bloke, Jermain Defoe has had a swagger from day one and John Terry and Sol Campbell have always been prepared to work hard on improving themsleves. We'll end on Sol and John. Two players fighting for the same England spot, who play for the top two clubs in London (and perhaps the country). Terry and Chelsea are on the rise, on the cusp of showing that they can dominate the league in the same way that Liverpool and then Manchester United have done. Campbell and Arsenal, after such an anaemic end to last season, have to prove that they are not on the wane, that their time is not yet over. Can Wenger, shorn of his talisman, conjure another miracle? We'll see. Welcome back to the merry-go-round.