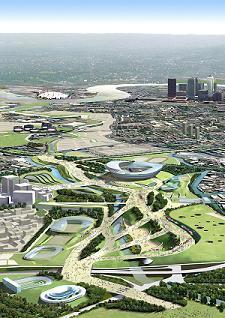 We've WON !!!! Seb Coe, Sir David of Beckham, Tony, Cherie and some grinning basketball-playing young scamps from East London have pulled off the biggest sporting come-back since....since....well, since Liverpool beat Milan a few weeks ago. Londonist is overjoyed, as is this chap, but these lot will probably be a little non-plussed (although if taunted, they would probably shrug and adopt a 'i never cared anyway mate' stance).

Debate, conjecture, disruption, increased tax bills and negative Evening Standard reports are all just round the corner, but for now, who cares? Let's have a party.