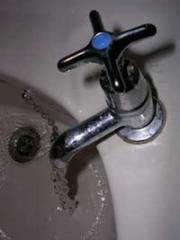 Well, well, well – and other such watery puns – it looks like the Mayor's forthcoming water conservation campaign has received some unusual support. Performance artist Mark McGowan has 'created' a challenging piece of work to help promote the cause. His finely crafted 'The Running Tap' is (erm, how shall we put this?) a running tap.

Installed in the House Gallery, Camberwell, the tap discharges a couple of litres every second – enough to completely fill City Hall twice a week, according to some scribblings on the back of an envelope. (Come to think of it, that’s not such a bad idea. It could house all the asphyxiated fish next time the Thames receives a massive discharge of raw sewerage.)

During the full year the tap will be on show, 15 million litres are expected to run through the installation. At 15,000 tons, that’ll make it the heaviest piece of artwork since Michelle McManus got a tattoo. But the cost to the artist won’t be as cheap as our gags. McGowan could end up with a bill running into tens of thousands of pounds, if, indeed he isn’t prosecuted.

With logic more twisted than a tapeworm’s DNA, McGowan defended his work: “This will save water by highlighting the waste in homes when people brush their teeth, wash vegetables or shave with the tap running.” Well, we’re all for such militant Dadaism – but it could be the start of a troubling new genre. Might we see anti-vivisectionists slicing into marmosets at each stroke of Big Ben? Is that what you want? Cos that’s what’s going to ‘appen.