A Congestion Charge For Trains? Have The Railway Companies Gone Completely F***ing Mental?

By london_will Last edited 183 months ago
london_will A Congestion Charge For Trains? Have The Railway Companies Gone Completely F***ing Mental? 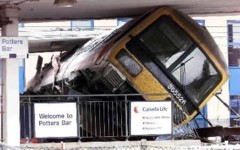 Yes, you read the headline right. The Association of Train Operating (in a vague sense) Companies, or ATOC, is proposing that commuters using the network at peak hours - all the time, then - will have to pay a surcharge above and beyond the price of their ticket.

ATOC? ATOSS more like, as in "We don't give ATOSS about the primary users of our service".

The perfectly balanced and not in the least deranged reasoning behind this monumentally stupid brainwave is that the railways leading into central London are overcrowded, so commuters must be deterred from using them. That's already complete lunacy if you consider that many commuters ARE deterred from using them by the fact that they are miserably overcrowded - your previous brilliant deterrent strategy is working, lads - and those who willingly fork out a king's ransom each year to complacent, larcenous and lazy train operating companies in order to have the privilege of spending two hours a day standing in a stifling metal box with their face wedged into the armpit of the sweat-drenched suit beside them are very probably likely a captive audience who take the train because they have no alternative.

So this isn't a charge intended to act as a deterrent. For many if not most commuters, it is a heavy tax of a necessary and vital service that they will simply have to shoulder.

The idea goes from being complete lunacy to being a breed of insanity so utterly rarefied and pure that it will have lexicographers reaching for neologisms and mental health experts reaching for the whisky bottle when you consider this part:

One of the reasons given by ATOC for this initiative is that the railways have become more crowded thanks to the central Congestion Charge zone.

The report blames road pricing for forcing people out of their cars and on to trains. Atoc says "the railway will need its own equivalent - rail peak pricing" to combat the increase.

"Any rail service which is a practical alternative for people using the car on a highcharge journey will need its own peak pricing system... the fare level will be higher."

So the plan is to drive people back to their cars and back onto the roads. This plan will not only represent a huge financial blow to working people who can in many cases ill-afford it, it will also increase road traffic and be bad for the environment.

Yet worse, it opens the terrifying prospect of an upwards-only price war between ATOC and TFL as they struggle to shunt people off their own congested networks and onto the other's.

Of course, companies could adopt flexible working hours or relocate outside the charging zone. Yeah, right. London's large companies and their well-paid upper echelons are going to be real happy to do that to spare their receptionists, post-room workers, clerks, typists, secretaries and epsilons in general the expense. A few might raise wages to compensate, but let's make a rough guess how many.

Still, at least the money will be tipped back into investment in the railways. Er, no. Although the C-Charge for motorists is poured back into public transport - including, as a matter of fact, London's railways - there is absolutely no mention of where the extra cash will go. So we can safely assume the answer is "straight into the pockets of the train operators". Besides, even if the money was spent on the railways, the story notes:

Despite record amounts of money being spent on the railways on some London commuter routes, one in four trains still runs late.

This is because the cash pours through the hands of whatever toothless, bureaucratic, quasi-state authority is running the railways todays and straight into the hands of yet another gang of money-hungry profiteers who skim hundreds of billions of pounds from you and me by pretending to fix the railways. This is what happens when a system designed to transport vital workers is placed in the hands of people whose only interest is their own profit.

This entire story is beyond belief. If this post seems a little petulant, than perhaps it's because Londonist is very angry indeed.