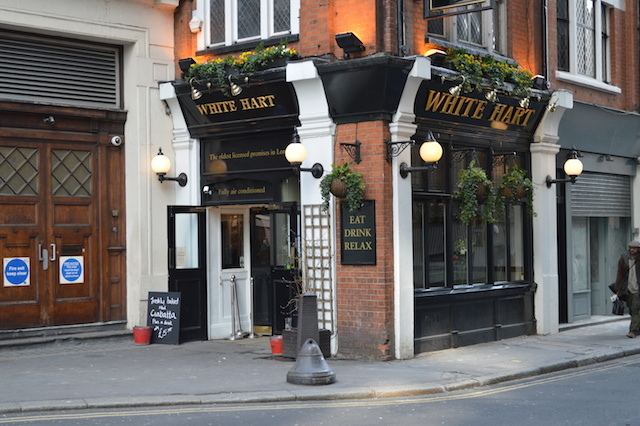 This pub was editorially chosen by Londonist for inclusion.

"The oldest licensed premises in London," reckons the lintel. It's a dubious claim. The building is only 100 years old, and built on a different plot to the original White Hart. But we like the sentiment. It stands beside the ancient crossroads of Drury Lane and Holborn, a junction whose antiquity probably goes back to Roman times. The pub is easy to miss, its tiny frontage cowering beneath three giant brutalist buildings that really need sorting out. Inside, it's a different matter. The pub extends back a long way, culminating in a brightly lit dining area. The plum seats are right at the front, though — a cosy pair of sofas in the window.

Whether it can be dated to medieval times or not, the pub certainly has history. Like many a vintage drinking hole, the White Hart claims Dick Turpin as a former customer. In this case, there's documentary evidence. A 1735 Old Bailey statement clearly puts him there. Then, in the 1840, the pub was dubbed 'the German Hall' and used as a gathering place for the Fraternal Democrats, an international society with a far-left agenda.

Today, the White Hart remains an everyman kind of place. No great flare or flamboyance, and a relatively limited choice of drinks... but a thoroughly pleasant place to while away the hours.