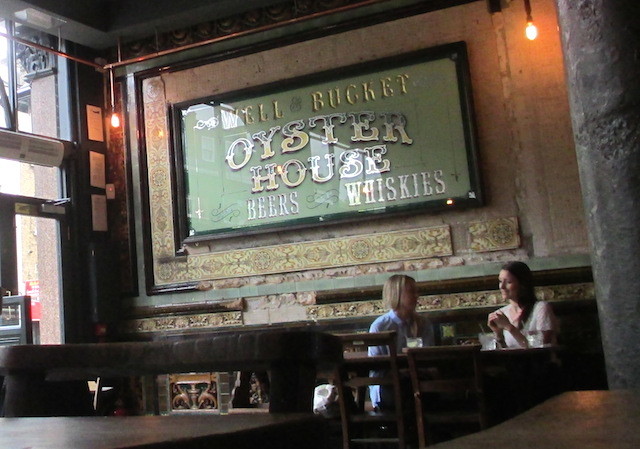 The Well & Bucket is both one of the East End's oldest pubs, and one of its newest. It was in the pint-pouring business from 1818 until 1989, but for the past quarter-century, it's traded as a restaurant and, latterly, wholesale shop. Now, it has reopened thanks to Barworks, whose other notable pubs include The Black Heart in Camden Town, the Slaughtered Lamb in Clerkenwell and the Electricity Showrooms at the other end of Shoreditch.

We're sorely tempted to declare this place the 'best pub in east London' and be done with it. Let us count the reasons:

- Superb ale selection, with rotating casks and kegs and a mind-boggling bottle range.
- Exceptional food. Who'd have thought a spelt salad could be the dining highlight of one's week? More-ish sliders come highly recommended. Meanwhile, oyster lovers are in for a treat.
- Atmospheric decor, including the crumbling glazed tiles rescued from the pub's previous incarnation, and huge skull portraits that recapitulate the idea of 'back from the dead'.
- A beer garden, small but perfectly formed.
- A candle-lit basement cocktail bar (5CC) with the friendliest staff you'll ever meet.

Needless to say, it can get very busy — but being a little further from the working population than nearby rivals, you should get a table if you get here early enough. If you like this place, try also Harrild & Sons in Farringdon, which is nearly identical, right down to the basement cocktail bar.