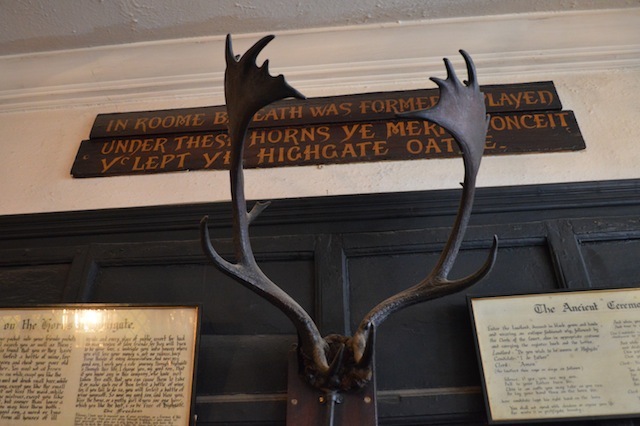 This pub was voted the best in Highgate by our readers. See the full list of winners here.

This is one of those places where the charm hits you through your nose before your eyes. A roaring fire, at least in winter, quickly fills The Wrestlers with the fug of a bygone age. It grabs you by the olfactory lapels as soon as you cross the threshold. The soothing reek of burning wood will linger on your clothes after you get home, just like the good/bad old days when smoking was legal indoors.

Everything about The Wrestlers is olde worlde. Our fist visit, sometime in the mid-Noughties, coincided with a power cut. The Wrestlers, unlike other local pubs, was able to soldier on, thanks to the light from the open fire and a stock of candles that would make a Tim Burton film look under-chandlered.

Such timeless allure makes The Wrestlers a popular place. On our most recent visit we arrived 20 minutes after noon on a Sunday, to find only one table unoccupied, and most patrons already tucking into Sunday roasts. As veterans of the Sunday roast circuit, we can assure you that this counts as 'very popular indeed'. We opted for the pork and a nut roast. Both were hearty and wholesome without any pretentious flourishes. At less than a tenner, this is exceptional value in an area populated by people with deep pockets. We were amused to note that one could order a turkey roast followed by Christmas pudding...in February.

The ale choice is also above average, with some genuine surprises on tap. The Brewdog IPA was depleted, but bottles of the same were kept in reserve. Yorkshire's Hop Studio was represented by a porter. Some strong concoction from West Lothian's Alchemy brewery was another eyebrow-raiser that we sadly didn't get to sample. Otherwise, Tribute, Meantime and Pride are available for the mainstream palate.

There's plenty of history in this place too. Anyone who looks around will spot plaques and antlers concerning the Swearing of the Horns. This is a Highgate tradition dating back to the 17th century, in which participants swear to a number of oaths that make no real sense. The most famous lines go something like this:

Amen to all that. We think. Anyhow, a prize pair of horns stands over the fire. We suggest you approach them and swear "You must not read Time Out while Londonist is available, except that you like Time Out best. You must not seek advice from Fancyapint.com, while you can get Londonist's guide to the best pubs in London, except you like their thoughts the more."

The L-shaped bar area is a reasonable size, but such is the popularity of the place that it can often get busy. There's a small beer garden out back for summer drinking, smoking and the ubiquitous Heath dog-walkers who frequent these parts.